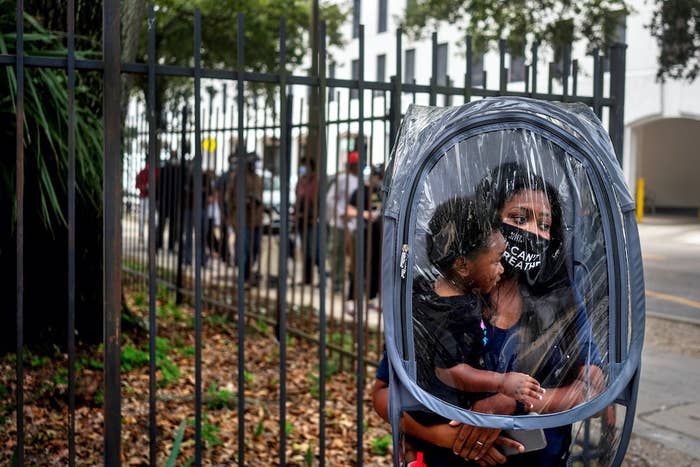 When Louisiana mother Dana Clark arrived for the first day of early voting at New Orleans City Hall with her husband and their 18-month-old son, she had no idea that she would wait over an hour-and-a-half to cast her vote. And she had no idea that a photo of her holding her son would become a symbol of the 2020 election.

The now-viral image, which was taken by area photographer Kathleen Flynn on Oct. 17, shows Clark standing in line holding her young son under a protective safety pod while wearing a mask emblazoned with the words “I Can’t Breathe.”

The striking image succinctly captures many of the key issues that are top of mind for Black Americans as they head to the polls in this election, including racial justice, police reform and COVID-19.

Dana Clark, and her son 18 month old Mason, wait in line at City Hall as early voting begins in New Orleans, Louisiana. Dana said she wasn’t sure how many people would be wearing masks while they voted so she wanted to be safe. Photo by @kathphoto pic.twitter.com/2BuAtVSeMo

Clark, who is a fifth-grade teacher, uses the plastic safety pod in her classroom for protection. Clark said she brought the pod to her polling location because she wasn’t sure everyone in line would be wearing masks.

The online reaction to the photo was mixed, but it was mostly supportive of Clark’s bravery and her commitment to voting amid a global pandemic that is disproportionately affecting people of color. One Twitter user replied, “People are making heroic sacrifices to do something that should be as easy as turning on a light switch…damn shame.”

Black women are leaders when it comes to voter turnout in their communities. According to the Pew Research Center, 64 percent of eligible Black women cast votes in the 2016 election, compared to 54 percent of Black men.

Voting has always been a priority for Clark, who said she brings her children along to demonstrate the importance of exercising your right to vote. After seeing her photo, Clark told BuzzFeed News, “This is everything, Black Lives Matter, my son, everything that is going on in America with Black men just being attacked, not being treated like citizens.”

If you are planning to vote in person this election, you should anticipate long lines and have your childcare plan in place ahead of time.

Care.com and the Armed Services YMCA have partnered to provide free childcare at 27 locations around the country on Election Day. Get more information at www.asymca.org/vote. Or partner with other families you have been socializing with to create a voting pod. Take turns watching each other’s children while the parents vote. If you’re planning to take your children with you to the polling place, arrive as early as possible to avoid crowds. Maintain social distance and wear a mask throughout the process. And be sure to wash your hands or use hand sanitizer after you cast your vote.