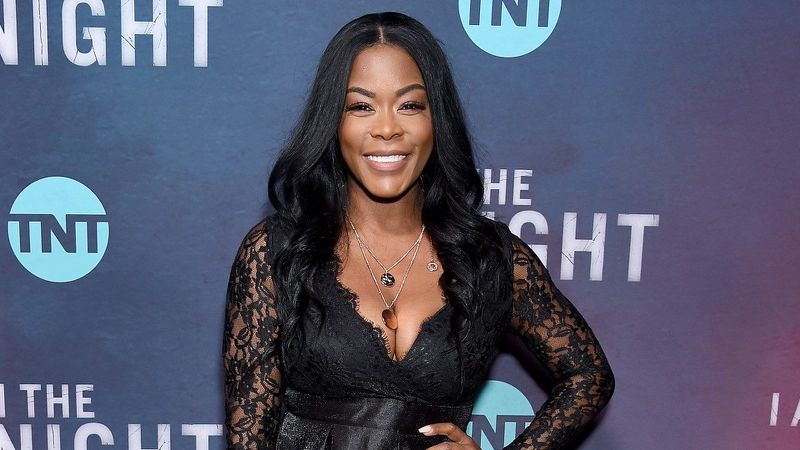 Before having a child of her own, you could say Golden Brooks had a bit of practice through acting.

For eight seasons, she played the hilarious, motherly and spirited Maya Wilkes on the hit comedy series Girlfriends, which has experienced a roaring resurgence since it aired on streaming giant Netflix last month.

Brooks played mother to Jabari on the show, bringing sensational authenticity to Black motherhood in a way that speaks volumes to her strength as an actress.

Her 11-year-old daughter Dakota Brooks-Woodside was born the year after Girlfriends ended.

So during her tenure on screen as Maya, Brooks in a way relied on her own mother.

“Growing up she was such a strong force,” she told Hey, Black Mom! in a phone interview on Friday. “She had different levels of anger and seriousness, and I feel like Maya is kinda the same.

“I think I channeled a lot of my mother and how she acted with my brother.”

Brooks previously had an on-screen son before playing mom to Jabari — also known as Jaboo-boo, Jumanji and many other hilarious names fellow cast member Jill Marie Jones (Toni Childs) came up with throughout the 172-episode series.

Believing that God prepared her for motherhood through her acting roles, Brooks is up again as a mom in BET’s short film A Long Look in the Mirror. It premieres Saturday at 8 p.m. as part of the network’s second season of The Waiting Room, a series of films tackling topics that affect Black families.

Brooks has represented Black motherhood in her art for years, and she doesn’t take these opportunities lightly. For her, it’s an honor to laud the intricacies of Black women and mothers because it’s rare to see attentive and accurate depictions of them.

Brooks is proud to be part of the Waiting Room stories, which this time around address Black women as the focus of mental health and breast cancer awareness.

“I think it’s important for pop culture — the movies, and film and TV — to continue to find ways to celebrate and shed light and to portray Black motherhood and what that means,” said Brooks, who won a BET Comedy Award for her role in Girlfriends in 2004. “I didn’t want to make that part of Maya that Black motherhood stereotype because there is a certain image that we think of when we think of Black mamas and their sons and Black mamas and their daughters.

“I really wanted to show a little bit of that humor in there along with her tenacity to make her son better, even no matter what her and Darnell were going through.”

Darnell, played by Khalil Kain after the first season until the series ended, was Maya’s husband on the show, and the couple produced a range of heartfelt, tear-jerking moments. Aside from uncanny chemistry, Brooks said they resonated so deeply with viewers because most people know a couple like them.

It’s only natural that strangers have approached Brooks after recognizing her as Maya. It certainly left questions swirling for her daughter Dakota, who was for a while too young to watch the show.

“Unless you went out and got the box set or you happen to catch some reruns, you really weren’t watching Girlfriends much,” said Brooks, who holds a master’s degree in writing from Sarah Lawrence College and wrote an episode in the final season. “Over the years, she would catch a rerun or two, so now that it’s on Netflix — and you know these kids live for Netflix. Her Netflix is like her little safe haven. She sits there and watches all of them.

Of course Dakota isn’t the only new or veteran fan catching up on unlimited, on-demand Girlfriends episodes.

Conversations about the series are constantly seen on social media, and #OhHellNo has since trended on Twitter. That was Maya’s sassy catchphrase in response to her friends, or the general public for that matter, acting in ways she deemed unwise, unscrupulous or just downright ignorant.

Brooks constantly reshares people who’ve Instagrammed or tweeted clips of Maya being motherly, outspoken and the show’s dose of comedic relief. Maya Appreciation Posts are also not uncommon to see, indicating that Girlfriends transcended time and is now available to empower a new generation of women and mothers.

“Twenty years ago,” Brooks said, almost in an air of disbelief. “Twenty years ago was when Girlfriends came on and it’s still prevalent and connecting and resurrecting and re-resurrecting in homes as if it just came on yesterday, so that’s a testament to (show creator Mara Brock Akil), to the wardrobe and to being this progressive woman who saw women as progressive. I think why it’s still so relevant is because we’re still in need of these types of characters.