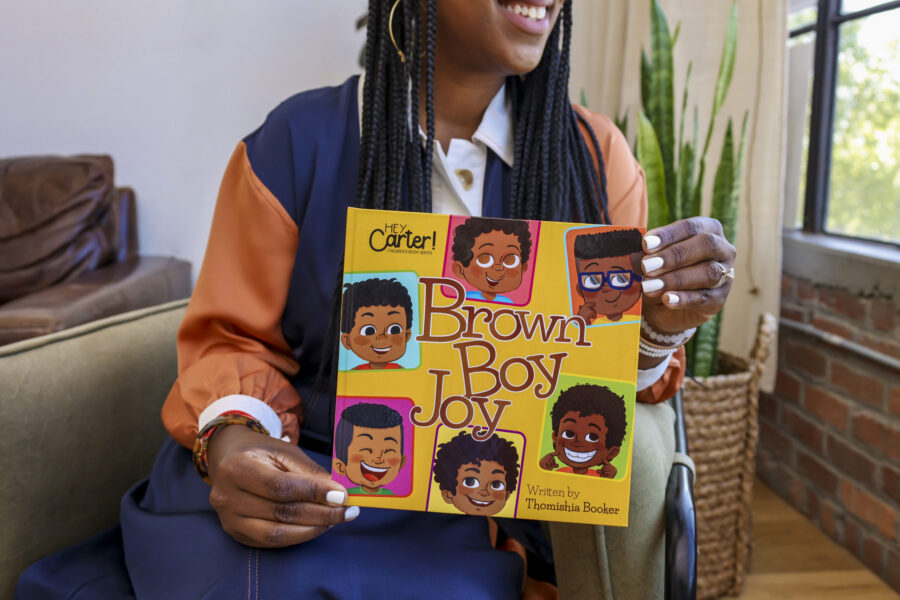 Her son was only 2-years-old when a daycare provider asked Thomishia Booker an alarming question: does your family play with guns at home?

“This is a small example of how she assumed his age-appropriate behavior…as dangerous and a cause for concern,” said Booker, a self-published author and entrepreneur. “So Black children don’t get to just be kids, and they’re often stripped of their innocence.

This experience was one of many that motivated Booker to start Hey, Carter! Books, where she publishes collections of children’s stories that accurately the depict joy and innocence of Black boys in order to shift the narrative they’ve been provided.

Booker said Black children in the media are seen as aggressive, misunderstood or shown as more mature than what they are. And they’re not often featured in literature, but efforts like Hey, Carter! are helping increase that number. HCB has independently published seven books in English and Spanish, including its newest release Santa Claus is Coming to The Town.

Of 4,034 children’s and young adult books received by the Cooperative Children’s Book Center from American publishers in 2019, 472 of them were defined as “about Black children” compared to 390 in 2018.

Booker also negotiated her own deal with Netflix. Her book Brown Boy Joy was featured on the platform’s original series Bookmarks: Celebrating Black Voices; singer Jill Scott read the story in the seventh episode, and Booker was the only self-published author featured on the project.

Booker, who is based in the Bay Area and works with her community’s Black Literacy Collective, knows the pain of growing up Black without positive images to turn to.

She was raised by a biracial mother and white grandmother, in a home where “seeing color” wasn’t an emphasis.

Booker, who is mom to 5-year-old Carter and 19-month-old Truly, is also one of the few dark-skinned people in her family. The disregard for her skin color by relatives and the outside world had damaging effects she hopes no other Black child has to experience.

HCB is an avenue for her to achieve that.

“I am constantly in awe because…this started as a passion project, something that was a gift for my son, something that shielded my inner child, and now it’s blossomed into something so much more that I’m very proud of,” said Booker, who holds a master’s degree in social work and a doctorate in education and counseling psychology.

“Mostly,” she added, “I love that all Black children can see themselves in my work.”

Her previous work allowed her to understand a child’s mind in order to craft stories they can easily digest, and she chose self publishing to maintain control of how and when her stories arrived in the world.

Though showcasing representation has been a major influence for HCB, Booker, who never intended to become an author, hopes her company will be part of a larger effort for Black children to reclaim the innocence they’re owed.

“Representation is just the beginning,” Booker said. “We want our children to see themselves in the books, but really it’s about challenging this narrative of anti-blackness and how Black children and Black people are seen in the media and seen in entertainment and ensuring that our voices are heard and that our stories are told in an accurate and truthful manner.”