Celebrating Juneteenth, the Newest Federal Holiday, with Your Children 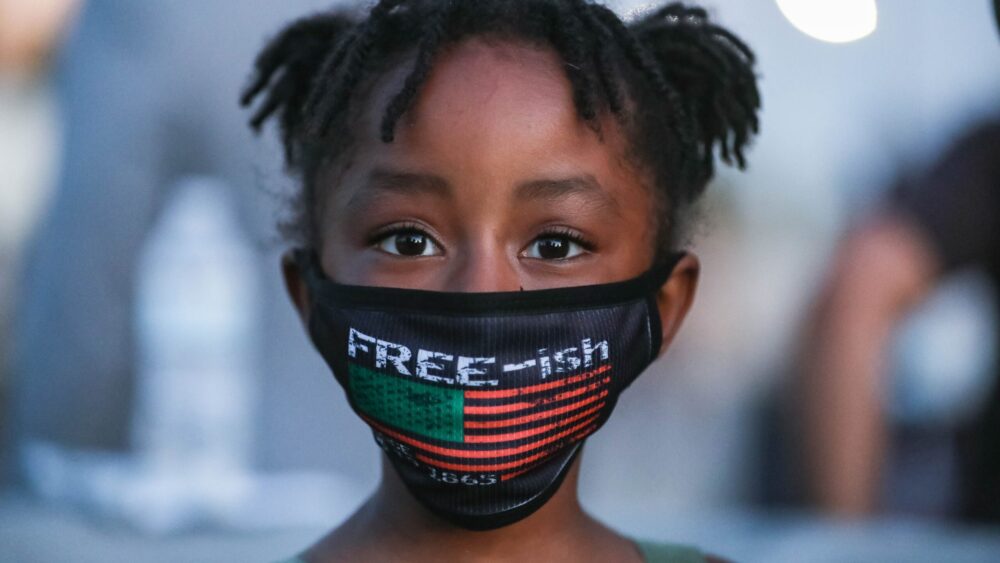 “Every year as a nation, we mark the Fourth of July Independence Day. But that freedom, we did not include everyone.”

While many celebrate July 4 as America’s independence from the British Empire, June 19, 1865, represents a day of freedom for the last American slaves. Juneteenth, which became the newest national holiday on Thursday, is a day for Black people to honor their culture and history. President Joe Biden signed a bill into law declaring Juneteenth a national holiday; the last holiday to be added to the federal calendar was Martin Luther King Jr. Day in 1983.

The history behind Juneteenth offers an especially unique opportunity for children to know how important it was for the enslaved to experience freedom.

How can you talk to your kids about the history of Juneteenth? Here are a few ideas to get you started.

Celebrating the holiday is more meaningful if you understand what’s being celebrated.

Short for June 19, Juneteenth is also called Emancipation Day, Jubilee Day and Freedom Day. Juneteenth is a holiday commemorating the freedom of the slaves in the United States.

In 1860 and 1861, several Southern states separated from the United States. This started the American Civil War. Southern Confederate states wanted to maintain slavery, while the Northern Union wanted to abolish it.

On January 1, 1863, President Abraham Lincoln issued the Emancipation Proclamation that made slavery illegal in Confederate states. Due to a low presence of U.S. troops, the law wasn’t immediately enforced and slavery persisted in Texas.

After the Civil War had gone on for two years, the Union won and the war had ended. Many enslaved people in the South had not been told of President Lincoln’s proclamation. On June 19, 1865, General Gordon Granger of the Union army told approximately 250,000 slaves in Galveston, Texas, that they were free.

The first official Juneteenth celebration took place in Texas, 1866. Over the years as Black people from Galveston moved to different cities, the celebration of Juneteenth spread across the country.

The first observances of the holiday included prayer and singing. Celebrants wore new clothes such as fancy dresses and suits to represent their newfound freedom.

Learn what each element of the Juneteenth flag represents

The Juneteenth flag was created by Ben Haith, activist and founder of the National Juneteenth Celebration Foundation (NJCF), in 1997 with the help of collaborators and Boston-based illustrator Lisa Jeanne Graf. The flag was revised in 2000 into the version we know today.

The white star in the center of the flag represents Texas, the Lone Star State, as well the freedom of African Americans in all 50 states.

The bursting outline around the star is inspired by a nova, a term that astronomers use to mean a new star. This represents the new beginning for African-Americans.

The curve extending horizontally across the flag represents a new horizon — the opportunities and promise that lay ahead for Black Americans.

The colors red, white and blue represent the American flag. These colors serve as a reminder that slaves and their descendants were all American.

There are many ways that people celebrate this holiday, including religious services, speeches, educational events, family gatherings, parades, marches, and festivals with music, food and dancing.

For younger children, parents can focus on the celebration of Black culture, reading books and learning about the Juneteenth flag.

You and your family can celebrate Juneteenth by having a feast featuring red foods. Red foods are a symbol of the resilience and ingenuity of enslaved people. Strawberries, watermelon, red-colored juices, red velvet cake, sausages, hot dogs and barbecue are just some of the red-colored foods you can include in your feast.

This year there will be a Juneteenth Comedy Jam, Juneteenth Sip N’ Paint, Juneteenth Nutrition & Fitness Jamboree, and so much more. Some events, such as the Juneteenth Unityfest, will be held virtually so you can celebrate from the comfort of your own home.

Books are an easy way to start a conversation about Juneteenth with kids. Here are a few books that will help do just that:

Juneteenth for Maizie by Floyd Cooper