Keith Lee vs. Producer Gyllian: Where People Crossed the Line 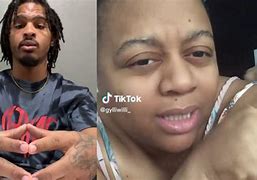 Scrolling TikTok is somehow now embedded into my daily routine, and of course I’m not alone.

So it makes sense that I got swept up in the Keith Lee vs. TV Producer Gyllian drama this week. Lee, a 26-year-old MMA fighter turned treasured TikTok food critic, called out a TV producer for seemingly implying in a previous video that he had stolen her idea. The producer, Gyllian Carter, responded with a second video claiming she wasn’t talking about Lee. Both Lee’s response and Carter’s second video came after an alleged slew of users tagged Lee in the original clip speculating about Carter’s unnamed accusations.

All in all, this online saga doesn’t look great for her. Lee and other TikTok users said Carter had two days to clear his name, and some even accused her of liking comments that mentioned Lee in her original video.

Now that we’re all caught up, we can discuss the outcome of Lee’s response video, which is about the only thing I have a strong opinion on.

Carter revealed with screenshots that Lee’s fanatics attacked her in the comments, so she discussed the responsibility that a major influencer can have; Lee has close to 10 million followers and his video to Carter received more than 10.6 million views. It’s not off base for a person with such a widespread social media influence to attain hundreds of thousands of loyalists.

Because of racial and ethnic disparities in healthcare, Black women are more likely to have pregnancy and infant loss.

People began relishing in her losses, writing comments such as “Haha glad you lost them #InKeithLeeWeTrust” as written by user ks2fr3sh. Social media highlights how classless we can be.

I personally don’t care what transpired between these two people: it’s NEVER OK to mock a woman for that type of pain. Carter was forced to turn off the comments on all of her TikTok videos, which users also made fun of.

Not apologizing for being frustrated about someone steaking my work.

And before you come for me, please understand how much I, too, adore Keith Lee’s content. When he visits a struggling restaurant and one of his reviews leads to thousands of online orders or a line wrapped around the corner, it’s heartfelt. It’s amazing. How he’s changing lives is a beautiful thing. He doesn’t ask for money and seems really genuine (this is coming from someone who believes little to nothing on social media).

When I first saw that people were heinously commenting on Carter’s loss, my first reaction was hoping there was something Lee could say to encourage people to stop.

Of course that’s not his duty, and he often reiterates that he does not condone hate comments. But, in my opinion, people’s despicable actions following his video supports her comment on influencer responsibility.

Lee is a sensation with millions of followers. He’s been dubbed our favorite internet cousin. He’s been called the sultan. People LOVE him and all he does.

It might be unfortunate how Carter approached a sensitive situation, but she didn’t deserve that.

It troubles me how we glazed over these attacks to come to Lee’s defense, and I understand where the Keith Lee warriors are coming from.

But you cannot, especially at the defense of someone who is a stranger to you, tease a woman for pregnancy loss – and there should be no counterstatement to that.