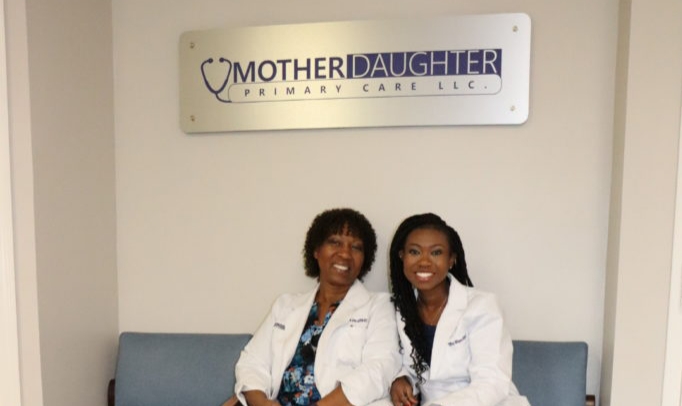 Tiffiny Wilson is somewhat of a workaholic.

The Florida-based nurse practitioner has before worked 28 consecutive days, and 15-hour shifts weren’t uncommon for her.

“I will work if there’s work to be done,” she said.

But when her 2-year-old daughter grew severely ill, it forced Wilson to step back and re-examine her energy. When infant Karter got sick, Wilson had to balance patient care at her nursing job with being a mom who needed to take time off for her daughter.

It wasn’t working out, and the job burnout was costing Wilson her own mental and spiritual health.

As a result, earlier this year the mom of three in leapt out of her comfort zone, left her comfortable job and pursued her own business — a medical clinic.

“I lived in guilt from 2018 to 2019,” Wilson told Hey, Black Mom! regarding her decision to work toward opening a clinic alongside her mother Angella John. Wilson and John attended Nova Southeastern University together, earning their MSN degrees in 2015.

“Before I had (Karter), my job was my baby. I was on a track to management. I was asked to be manager after seven months,” Wilson said. “I’ve been working since I was 14. I’m not a stay-at-home mom.”

Wilson’s time at home allowed her to achieve the balance she was missing when she was focusing too heavily on her vocation.

Pushed by her husband Roosevelt Wilson and other relatives around her, Wilson and her partner John cut the ribbon to Mother Daughter Primary Care on Nov. 29 in Plantation, Fla., which is near Ft. Lauderdale in the southern region of the state. The facility offers adult primary care, physicals, wellness exams and more.

Wilson admitted that it took her a while to jump on board.

“Everybody saw the vision more so than us,” she said. “It’s really hard when you’ve got stock options and you get bonuses and you make a certain amount of money to do your own thing. They were pushing us more than we were pushing ourselves.”

She said if anyone had a skill, they offered it.

Her cousin is a realtor and found the seasoned duo a high-traffic space at a deal. Adora West Anderson, a social worker for Humana, volunteered to market Mother Daughter Primary Care because she believed in the business. Roosevelt Wilson, who served as Tiffiny Wilson’s and John’s life coach, offered his services at the clinic.

Since opening, Mother Daughter Primary Care has attracted an assortment of patients from referrals, Anderson’s marketing efforts and partnering with the local Urban League chapter. Wilson has enjoyed seeing patients again, this time working at her pace, her way.

Karter, she said, is a perfect picture of health and is just about ready to go to daycare.

“I’m allowed to be myself.”