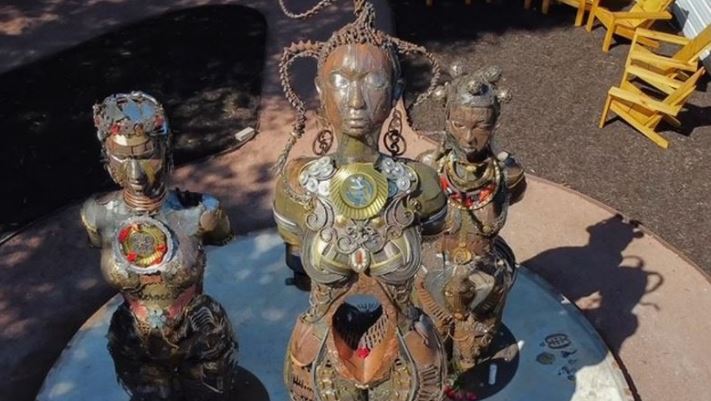 For years, the face of gynecology has been James Marion Sims, who performed medical experiments on enslaved women.

In the 1800s, Sims tortured and experimented on up to 11 enslaved Black women without their consent or anesthesia for the pain. In 1939, a statue of Sims was erected in front of the Alabama State Capitol building in Montgomery. In 2018, even after more people became educated on the matter, New York officials voted to have a statue of Sims in Central Park.

The statue at the historic site in Alabama deeming Sim the “father of gynecology,” like many others in Montgomery and in this country, is a reminder of a traumatizing history.

Activist and artist Michelle Browder decided to do something about it.

Browder, who runs a Civil Rights tour company in Montgomery called More Than Tours, has honored some of these mothers of gynecology with a monument. It features Anarcha, Lucy and Betsey —  just a few of the women Sims operated on unjustly.

The large sculpture was unveiled in Montgomery in September.

Browder credits her move to Alabama as part of the inspiration for her creation, a 15-foot sculpture welded from recycled metals that will commemorate these women.

“It wasn’t until I moved to Alabama in 2002 when I really started digging deeper. And then when I started my tour service in 2016, I started researching the iconography around the city and found out that (a statue of) James Marion Sims was a proud resident at the state capitol, and it bothered me,” Browder told The Montgomery Advisor. “So I really started thinking, ‘What can I do?’ And the more I rode by that particular statue and told people about Montgomery, I started focusing and honing in on the stories of Anarcha, Lucy and Betsey.”

Part of the More Than Tours experience also entails historical pieces, like the old Greyhound Bus Station where young Freedom Riders were beaten by angry mobs in 1961.