We lost an icon and a hero, but Kobe Bryant’s family lost much more 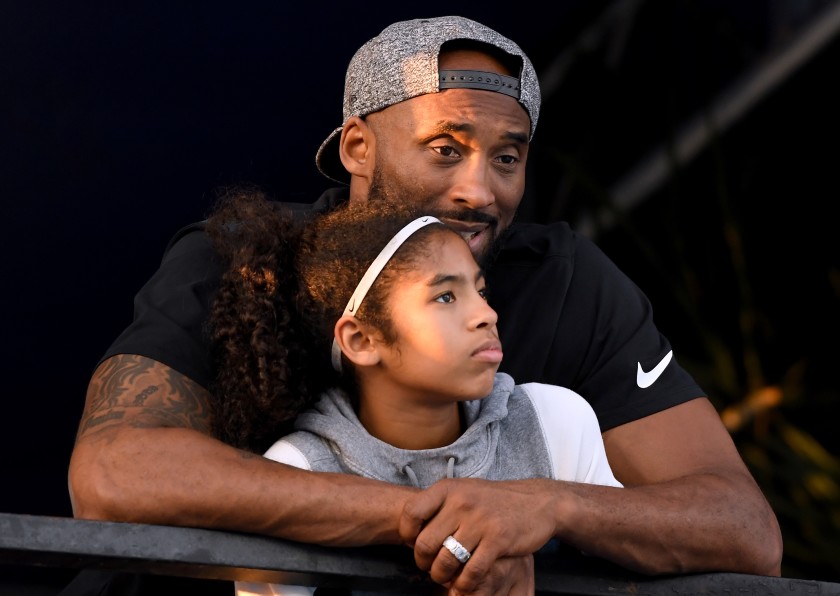 There was something so tender about her smile.

I vividly remember watching on TV Gianna Bryant’s reaction to her dad crossing the 50-point threshold the final game of his career. Her grin grew wider as he continued to make history, leaving us with everything he had to give the game of basketball.

She excitedly hugged her mother Vanessa as Kobe Bryant capped his unparalleled career as a Los Angeles Laker with a remarkable 60-point performance. It was the most Kobe way to end it.

It was clear from watching Gigi on that April night in 2016 that she shared her father’s passion for basketball.

Over the years, we’ve had the pleasure of watching her bud into an immensely talented young player. She walked like Kobe. She faded like Kobe. She had so many of his mannerisms on the court that you could see why he shut it down when people asked the father of four girls about having a boy.

Here’s what he had to say about it and Gigi’s future WNBA career on the Jimmy Kimmel show in 2018:

Watching Kobe Bryant on ‘Jimmy Kimmel Live’ gushing about his daughter, Gianna, crushes me even more

Gotta get off Twitter for awhile … Going to play basketball with my daughters #RIPMAMBA pic.twitter.com/gA3PzTJsJy

A helicopter crash claimed the lives of Kobe and Gianna Bryant, along with seven other victims on Sunday in Calabasas, California. They were headed to a basketball tournament, and the reason Kobe ultimately began taking a helicopter across the city was to spend more time with his girls.

Life is so unfair. The shock of this event has been difficult to process.

He retired at the end of the 2015-16 NBA season after playing his entire 20-year career with the Lakers. Kobe was just getting started.

The unthinkable tragedy robbed us from the second half of his greatness.

That’s selfish of me to say, though.

His wife and three girls lost more than we could ever imagine.

Days before the accident, we saw him talking hoops at a basketball game with Gianna. The moment quickly became an endearing gif and is now a memory. Dozens of videos have resurfaced to show us how deeply Kobe loved his girls, from Natalia’s and Gianna’s matching Lakers outfits when they were young children to Vanessa’s baby shower welcoming his fourth daughter Capri last summer. He was also father to 3-year-old Bianka.

You felt so much love, even from the outside, seeing photos of Kobe and his girl tribe.

Happy Mother’s Day @vanessabryant we love you and thank you for all that you do for our family. You are the foundation of all that we hold dear. I love you #mybaby #lioness #mamabear #queenmamba

His oldest child Natalia recently turned 17, and he posted beautiful then-and-now photos on his Instagram, seeming to beam with pride through the caption. Family moments took up more real estate on his page than his post-basketball ventures and visions.

Kobe was enthusiastic about ushering Gigi, his “daddy’s girl,” along her path in basketball. After retiring, he became her coach for her Mamba Sports Academy team, part of a group he started to strengthen and support young girls like his daughter. He exposed her to WNBA and women’s college basketball. Gianna had hoped to play for UCONN, according to a Los Angeles Times tribute to the nine crash victims.

This loss has shocked us. It’s left us in tears and in disbelief. It’s left us trying to wake up from a never-ending nightmare. Kobe was a once-in-a-lifetime treasure. His influence spread far and wide, whether you enjoyed basketball or not. We’ll never get him back, and that’s hard to accept.

Though we mourn the loss of a monumental figure, in time, reality will settle in. The sting will forever linger, but we’ll have to keep moving.

As we heal, let’s also remember Vanessa, his three daughters and the other families who must live with Sunday, Jan. 26, 2020, forever.

A wife lost her husband and daughter. There are three girls who lost their father and their sister. That husband — that father — just so happens to be Kobe Bryant.

4 thoughts on “We lost an icon and a hero, but Kobe Bryant’s family lost much more”