How two adult sisters with autism found hope through art 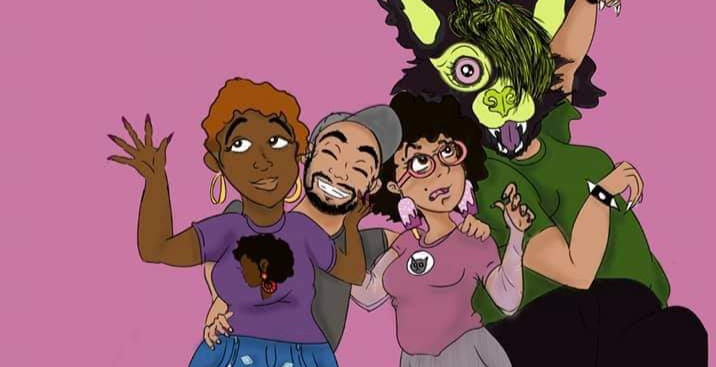 Although both of her daughters are adults, some days still remain a struggle for Thomasina Carver.

The Durham mother recently retired from her job of 33 years at a psychiatric ward, and only then did she see how the COVID-19 pandemic affected her children Brianna Thompson, 27, and Shelby Thompson, 29.

The sisters were both diagnosed with autism at 4-years-old, respectively. When Carver stopped working full-time earlier this year, she noticed the isolation had taken its toll on them.

Prior to quarantine, Shelby was seeking suitable employment, while Brianna was close to finishing at her community college.

When older sister Shelby was initially diagnosed, Carver didn’t know much about autism outside of her neighbor from her own teenage years.

“All I knew about autism was non-verbal people could not function,” she admitted. “It frightened me, and so I started doing a lot of research on it, a lot of reading.”

But in focusing her attention on the oldest of her two daughters, something may have slipped by. It wasn’t until an accident that left Brianna, who was 3 at the time, in the emergency room did she recognize that her daughter’s speech wasn’t developing at an expected pace. She was later diagnosed with Asperger’s Syndrome.

A 2017 study estimated that about four boys have autism for every girl, and some of the earlier data points to a skewed sex ratio. Since there were fewer girls diagnosed at the time, Brianna and Shelby became part of a study when they were children.

There were both challenges and joys of raising two girls with autism. Shelby struggled with behavior, especially at a young age. Several times a week, Carver would have to stop work to either take a call from or drive to Shelby’s school. She said once, a teacher’s assistant even broke Shelby’s arm trying to restrain her.

Brianna was more emotional, according to her mother. She often dealt with depression. She continues to battle bouts of sadness as an adult, but loves her independence. When she started at her first community college, she took the bus alone after a summer of practice with Carver.

While the girls had a social worker and assistance from her current husband, Carver bore much of the weight.

“I did a lot of praying, a lot of sneaking out, going to church early in the morning,” she said. “I’d go to the 6:30 service, so that I could be back before they’d wake up when they were teenagers.”

Carver’s mother was local, but she couldn’t handle the girls’ behavioral outbreaks. She instead offered assistance by doing housework or other light tasks.

“Basically it was me doing this. Me and God, honestly.”

“A lot of praying, a lot of up all night sometimes with behaviors, a lot of sitting at the door of the bedroom when we had behaviors, a lot of sleeping in the living room just watching down the hallway to make sure they didn’t get in fights with each other,” Carver paused, almost mystified by the recollection. “You just wouldn’t believe, I tell you.”

Brianna and Shelby are both currently on medication and have seen the same physiatrist for years. Carver still hosts birthday parties and other events for her daughters so that they can have healthy social experiences.

But she notices something special when they engage in art.

For Brianna, it’s drawing. For Shelby, it’s acting byway of puppets or her furry suits.

The girls’ art allows them to express their creativity, and their mother has taken notice of the escapism it provides.

When Shelby was in high school, she was in a visual arts program. She learned even more than she already knew about computers and how to create art on them. She started drawing, providing inspiration for her younger sister to see.

It didn’t take long for Brianna to also pick up drawing.

While the sisters have shared hobbies, such as gaming, and individual attachments, there’s something about artistic expression that soothes them.

A local barber shop recently displayed some of their works for purchase, and Carver could feel how excited they were by the mere preparation.

In a private Facebook group, Carver posted an amazing family portrait Brianna created as a way to attract even more exposure to anyone willing to hire special needs adults.

“That was the reason I posted that photo on Facebook. I knew they needed something to do,” Carver said. “These girls are sitting at home, and I just feel like they’re wasting so much talent. They’ve been here a solid year, and I was still at work up until now.”

The family photo shows Shelby dressed in a fur suit, which is a dream of hers. Carver has only been able to buy a head for her but hopes one day she can help obtain an entire costume for Shelby.

The reason Shelby is seeking employment is to pay for one of the suits for mascoting.

“I decided that I have to try and get these girls out there,” Carver said. “I have to let the world know who they are and what their capabilities are.”