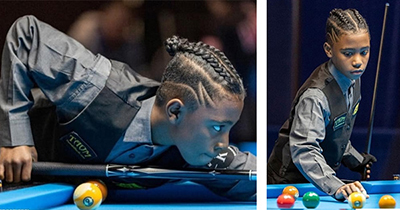 D’Angelo “Jawz” Spain, an 11-year-old from Maryland, has been playing pool since he was 4.

It all started when his family wanted to put a karaoke machine in their home.

“One day we went out to go try to get a karaoke machine or something like that. [My wife] was like where are we gonna put it at? I said we can make space,” Spain’s father Frank Spain II recalled.

That’s when they had an idea to get a pool table instead. They could only put it in the living room, so they had to remove the couches to make room.

“He did talk me into it,” Spain’s mother Angela Spain said.

D’Angelo Spain fell in love with pool almost immediately, and the rest is history. After seven years of playing, he has gained the status as one of the best in his hometown of Bowie, Maryland.

After dominating multiple opponents, his dad eventually gave him the nickname “Jawz.”

Not only is Jawz respected locally, but he has made noise across the country participating in multiple tournaments in places like New York and New Orleans.

Spain has even gained a ranking status in the 13-and-under division in the Junior International Championships.

Eventually, Spain plans on competing professionally, giving him a chance to compete with the top pool players in the country.

The Spain family is currently fundraising to support Jawz and his little sister Franki’s dreams of traveling across the country for pool tournaments.

Although they enjoy what they do, traveling across the country can be costly.

If you would like to support, visit their GoFundMe today to donate.