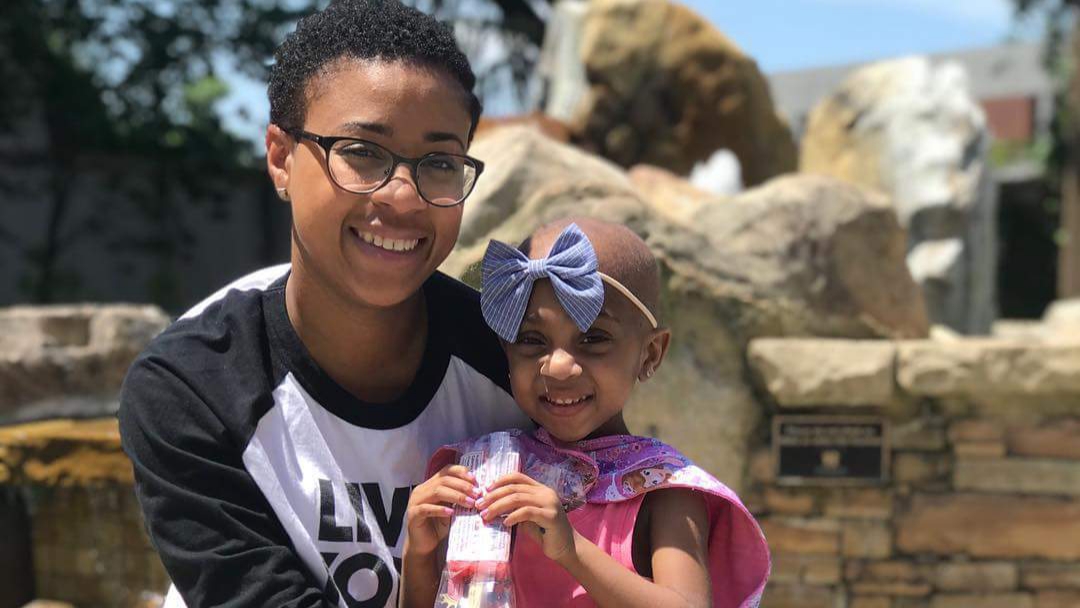 ATLANTA, Ga. — It was a normal April morning in Atlanta.

Mikeon White English headed to her job of 12 years at Children’s Healthcare of Atlanta’s Scottish Rite hospital. Her husband Johnathan was about to drop their then-2-year-old daughter off at daycare.

Everything was perfectly fine — until a call lit up English’s cell.

When she answered to hear the voice of Aubrey Kate’s pediatrician instead of a nurse, her heart dropped.

“At that moment for me, it was ‘Something’s wrong,’” English said. “First thing in the morning, hearing your pediatrician’s voice on the other end and it’s not his nurse. I knew at that moment something was wrong.

For more than a decade, Mikeon spent her nursing career caring for sick children, including those with cancer. She never imagined she’d be on the other end.

After tests revealed a mass on her liver, English’s daughter Aubrey Kate was diagnosed with a rare childhood cancer called hepatoblastoma on April 20. Aubrey Kate is the youngest of four siblings, where the eldest is 16.

On May 8, surgeons took half of her liver to completely remove the tumor. She was assigned six rounds of chemotherapy over the 18 weeks following her surgery. On Monday, Aubrey Kate started her final round of chemo.

The family learned the disease is associated with prematurity; Aubrey Kate was born at 26 weeks weighing 1 pound and 10 ounces, so she’s been a fighter since birth.

She spent her 3rd birthday on May 14 in the Pediatric Intensive Care Unit (PICU) attached to lines and monitors and with an epidural in her back.

September is Childhood Cancer Awareness Month. Nearly 11,000 children under 15 are expected to be diagnosed with cancer this year, according to the American Cancer Society. About 80 percent of them can survive at least five years, up from 58 percent in the mid-1970s.

Because of Aubrey Kate’s condition, English’s household has downgraded to a single-income home, though she works when she can.

She is grateful for the outpouring of support, because, especially in her line of work, she knows that isn’t a reality for everyone.

She had a fundraiser at her local church and on Aubrey Kate’s page. The toddler also has a GoFundMe.

English said the medical bills keep rolling in. When Aubrey Kate is well again, English said she plans to pay it forward.

“I thought the NICU days were hard, but they don’t compare to these,” said English, who created the social media campaign #PrincessStrong.

When English is at the hospital with Aubrey Kate, she disconnects entirely from her medical profession.

“You try to be a mother and let the nurses be nurses, because those moments when she’s so sick, your emotions are not in nursing mode,” English said. “Don’t give the medical terms, break it down for me, because not all the time am I processing things as if I were at work. I don’t process them the same because my emotions are so tied in from being a mother.”

English and Johnathan, who took the initial news much harder, didn’t tell the other children until they gathered every detail. When they told Aubrey Kate, they used gentle language such as the hospital visits being for “getting the bad things out of your stomach.” The 3-year-old has embraced her “tubey” and understands when it’s time to go to “my hospital.”

Aubrey Kate’s initial pediatrician visit in April was for frequent urination; English thought it could have been a urinary tract infection. Doctors tested Aubrey Kate for a UTI and diabetes, later clearing the stool from her liver. Next, her pediatrician ordered an ultrasound because something still seemed odd.

On April 20th, our whole life changed. Aubrey was diagnosed with a hepatoblastoma. Little did we know that this rare childhood liver tumor was associated with her prematurity. On May 8th, Aubrey had a liver resection at CHOA where doctors removed 50% of her liver to completely remove the tumor. We found out last week that even with totally removing the tumor, Aubrey will still need chemo treatments to rid her body of all the cancerous cells. 30% of her tumor was made up of an aggressive cell. She will have 6 rounds of chemo over the next 18 weeks. She started chemo this past Monday. Almost 3 weeks later, we are still in the hospital. We welcome you to follow her story and see God continue to work miracles on this little girl!! #PrincessStrong #hepatoblastoma #hepatoblastomawarrior #hepatoblastoma #cancersucks #childhoodcancer ??????

“It didn’t register to me that it was going to be anything more,” English recalled. “We went in for the ultrasound on her belly and we went on about our day. It was fine. He said he would call when the results were in.”

When she got the call about the ultrasound revealing a mass on Aubrey Kate’s liver, she cried in her boss’s office for the 45 minutes it took Jonathan to bring their toddler to Scottish Rite. Upon entering the hospital’s emergency department, Aubrey Kate was in high spirits.

While they have been some hard days, the family has had many, many good ones throughout her treatment.

English said her daughter’s smile, energy and strength gives her courage, too.

English said her family’s living room now resembles a hospital room. Aubrey Kate has a hospital bed there, and English converted an old dresser into a medicine cabinet for supplies. If Aubrey Kate gets a fever in the middle of the night, English packs a bag and heads to the hospital.

Through it all, there is no shortage of smiles from Aubrey Kate.

“She gets up every day ready to fight,” English said. “It makes you get up, no matter what type of day you’re having.

“I have to get up and do what I need to do to get her through this.”

To support Aubrey Kate and her family, visit her page HERE or her GoFundMe HERE.