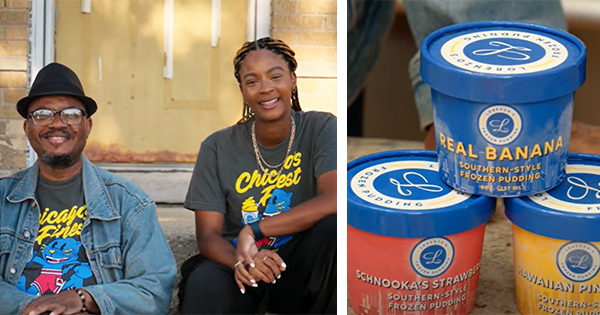 Genesis Bencivenga, Sr. struggled to get the words out.

She was in disbelief to find out that her product would now be stocked in the freezers at Walgreens, and she recorded a TikTok to capture her reaction.

Genesis, along with her father Lorenzo Bencivenga, founded Lorenzo’s Frozen Pudding in 2011. The daddy-daughter duo from the Southside of Chicago would see their frozen treat business start over three times.

“My father has always had an entrepreneurial spirit,” Genesis said. “He’s done things to try to create something better than what we had. We hustled hard for everything, but it was fun to be able to create stuff and go sell it.”

The popularity of their quality dessert became their biggest challenge.

But thanks to an entrepreneurial program aiming to create equitable opportunities for diverse businesses, the Bencivengas have the support they need to help sustain their company.

Genesis graduated from the program in 2020, the same year her business restarted for a third time. And graduation is not a guarantee that an entrepreneur’s products will be in major retailers.

Lorenzo, a master cook and Army veteran, and Genesis started making the frozen Southern-style pudding in their home kitchen. As it grew in popularity, the pair struggled to keep up with the demand.

They were forced to pause the business in 2015. Lorenzo’s Frozen Pudding later lacked the infrastructure and resources to maintain distribution; in 2015, it was sold in dozens of Chicago-area stores.

Genesis Bencivengas was determined to revive the company and committed to approaching things differently. She learned from previous setbacks.

This time around, she took advantage of local organizations designed to assist entrepreneurs. She connected with The Women’s Business Development Center, which helps women- and minority-owned businesses gain economic self-sufficiency.

“Genesis came to us seeking advice on how to restart her business, and the fact that she chose to do that during the height of the pandemic is a real testament to her tenacity and desire to success,” Johnson said in a Walgreens report.

Bencivengas reflected on her journey, noting that people have asked her why she didn’t give up.

“I mean, how can I?,” she said. “I feel like it’s a life-or-death situation. I love what I do, I know I can do it well and I know that with persistence it will happen.”