Haitian baby on ‘Girls’ finale isn’t black, says real mother, and we should talk about that 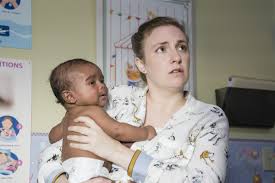 Here we go with this again.

Sunday’s series finale of the hit HBO show “Girls” caused quite the uproar. Hannah, the lead character played by Lena Dunham, got pregnant by a light-skinned Pakistani surf instructor earlier in the season and delivered a suspiciously melanated baby. Viewers frankly questioned how Hannah and Paul-Louise could produce a black baby, especially on a show that seriously lacked color.

But perhaps the biggest outcry came from the child’s real mother, Jaclyn Nichole. In a tweet that has since been deleted from her personal account — which has since been made private — Nichole clarifies that her baby “isn’t black.” He and his twin brother are Puerto Rican (her) and Haitian (dad).

Did you know that 95 percent of the nearly 11 million people in Haiti are black? And the twins are as adorable as they wanna be, but it’s important for their mother to note the difference between race and ethnicity.

As a noted African-American proverb states: Everybody wanna be black until it’s time to be black.

It’s sorely critical that we embrace our black children as what they are in order to equip them with the armor they’ll need to thrive in a world of powerful enemies.

The one-drop rule typically applies to “biracial” children mixed with black; not to mention, black genes often dominate, which mean these children will more likely be seen and treated by society as such — sorry Taye Diggs.

The actor, a dark-skinned black man, doesn’t want his mixed-race son to identify as black because the child’s mother is white. This type of thinking perpetuates the notion that being mixed is, in a way, better. And we’ve all seen the meme that reads, “Dear black girl, you don’t have to be mixed to be beautiful.” Though it’s greatly appreciated, it was created for a reason.

And perhaps, try not to procreate with a person who can’t fully accept blackness. Remember the story of the black dad who sent photos of his daughter’s braids to her white mother? The mom called the beaded style ugly because it looked “too black, and she’s not.”

And it isn’t just Diggs or the mother too afraid of cornrows or the mother who doesn’t see her black child as black, blackness appearing less than is really all over: in our advertising, on our social media, within our every day lives. We can’t afford that.

We must, especially for our children, embrace and celebrate blackness to promote self love. There are very few other places they’ll find it.