Black Mamas Matter Alliance is leading the first Black Maternal Health Week to further raise awareness about and rally behind a harrowing crisis among black mothers, who die in childbirth at disproportionately higher rates than other races.

Black mothers are three to four times more than white mothers to die from complications during pregnancy or childbirth. 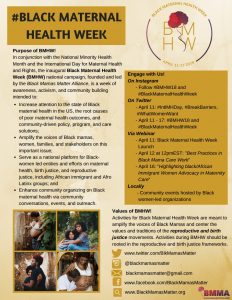 The statistics have garnered national attention in the recent years, and Black Mamas Matter hopes to take it a step further in advocating and finding change.

BMHW inches toward the bigger picture.

“I see Black Maternal Health Week as one of those ways that we are deeping the conversation,” said Elizabeth Gay, Black Mamas Matter’s steering committee chair. “The goal is for more people to be talking about it and understanding the issue goes deeper than the statistics.”

The goal of BMHW is to increase attention to the root causes, amplify the voices of black women on this issue, serve as a national platform for black women to lead on the issue and enhance community efforts regarding black maternal health.

What are you doing for self-care as a Black Mama? On this first national #BlackMaternalHealthWeek we are centering and amplifying the voices and stories of Black women to advance maternal health, rights and justice! Join the movement by texting UNITE to 90975. Together we will declare that #BlackMamasMatter! #BMHW18

The recognition is also a chance to highlight black maternal health as a global issue.

“We thought it would be a good idea, particularly, to center what (Black Mamas Matter Alliance is) doing for black moms in the United States and for things that are happening globally,” Gay said. “This not an issue that affects just the developing world. People don’t think about the U.S. as being a place of having bad maternal mortality rates.”

Black Mamas Matter began in 2016. Its representatives are clear they aren’t just reciting the alarming statistics but helping others focus on black maternal health by means of strategic outreach.

A huge advancement for the organization has been the increasing national dialogue.

“We’ve gone from zero convestaion to converstion,” Gay said. “I think there are many more steps to take. There’s been some action at the policy level on maternal health overall, and I think that’s a good sign, but one of the things that still need to happen is concentrated policy action that especially centers black women and black women’s voices and experiences.”