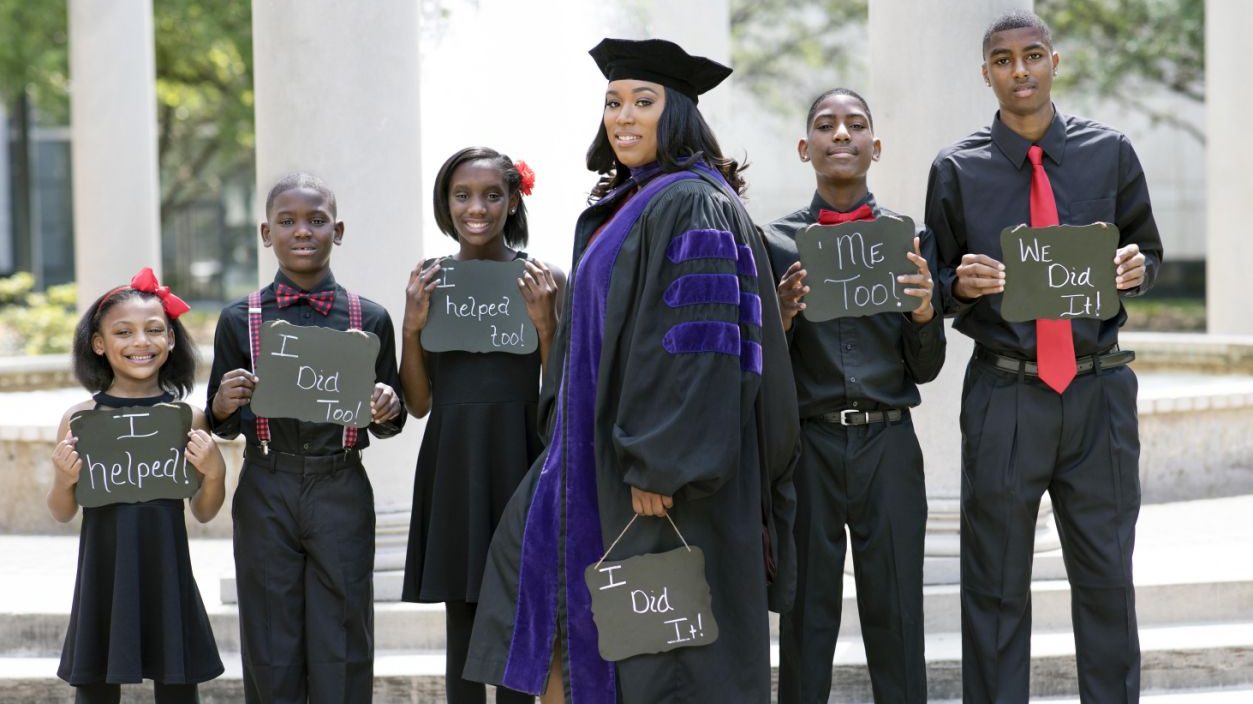 Nearly a decade ago, Ieshia Champs tried to commit suicide.

Her world came crashing down in 2009. The Port Arthur, Texas, mother of five lost her home in a fire. She was laid off from her job. The father of two of her children died of cancer while she was 7 months pregnant.

In May, Champs will graduate from law school and be one step closer to fulfilling her dream. She’s wanted to be a lawyer since she was 7, according to CBS News.

Champs, 33, credits her children, aged 5 to 14, for reaching the formidable accomplishment, and she recognized them in her graduation photos.

Snaps from her inspirational shoot with Richard Holman Photography went viral in early April. Champs stood front and center in her graduation gear holding a sign that read “I did it.” Her children were lined up behind her with signs such as “I helped!” and “We did it!”

“I took the picture with my kids because they helped me through school,” she said proudly. “They would help me review flashcards while I cooked. They would sit as a mock jury while I taught them what I learned that day. I would sit in my closet and pray and cry because I was overwhelmed and my oldest son, David, would gather his siblings, give them a snack, make them take a bath, gather their school clothes, all to make things easier for me. And I had no knowledge of him doing that until I went to do it.”

Champs will be graduating from the Thurgood Marshall School of Law at Texas Southern University. She hopes to specialize in juvenile law and one day become a judge, using her disadvantaged childhood as motivation to help youth.

Champs’s qualms started before her rough stretch in 2009. Her mother’s drug addiction forced her into the foster care system, where Champs bounced around. She dropped out of high school when her 14-year-old sister had a child. Champs didn’t have much guidance when she left school for a job at a call center. Her father had died, and she wound up homeless, living with whoever would take her in.

Champs had her first child at 19. While pregnant with her fourth child, she said she met a prophetess at a Houston church who convinced her to get her GED.

“I thought it was a little crazy because I was too old and I had three children with my fourth child on the way,” Champs said.

But she did it. She got her GED. She went on to Houston Community College and then the University of Houston-Downtown.

Her upcoming TSU graduation will bring her closer to helping children she can relate to.

“I feel like with what I’ve been through as a child and in my upbringing, I can probably help some of these juveniles who may feel like there’s no hope for them,” Champs said. “I want to be the one to fight for those children who are in these horrible living arrangements.”