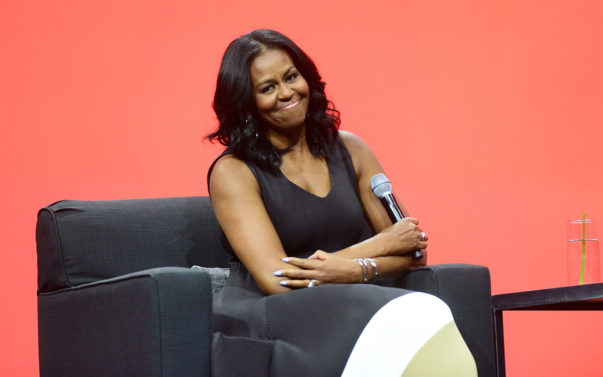 Former First Lady Michelle Obama said in her first post-White House speaking engagement that if she were interested in running for president, she’d say so.

She’s not, a hopeful myth Obama clearly dispelled during a 45-minute Q&A on Thursday in Orlando, Florida, citing her two daughters as reasons why.

“I wouldn’t ask my children to do this again, because when you run for higher office, it’s not just you, it’s your whole family,” Obama said, reported by the Orlando Sentinel. “Politics is tough, and it’s hard on a family.”

Malia, 18, and Sasha, 15, have been in the spotlight for more than a decade, Barack Obama’s historic presidency forever changing their lives. Malia took a year off after graduating high school before she attends Harvard this fall, and Sasha picked up a summer job at Martha’s Vineyard last year, because Michelle plays NO games. She shut down the girls when they were named to Times’ 25 Most Influential Teens of 2014, saying “I don’t know why — they’re not influential, they just live here [the White House]! They have done nothing to gain any influence.”

Public service is important to the Obamas, Michelle noted Thursday by saying it will “always be in our blood.”

The Obamas have in so many ways said Michelle wouldn’t ever run, but her addressing it directly had to sting for the 2020 hopefuls.