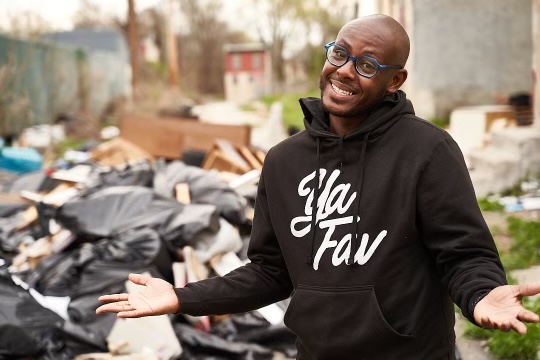 We have learned so many lessons in the last year and a half. Everything from death, lack of family gatherings and a disrupted economy have people wondering what could happen next.

For former sanitation worker Terrill Haigler, he decided he wanted to make a  difference by spreading a message that puts sanitation at the forefront in a time where cleanliness is a top priority for communities.

The 32-year-old father of three has stated that his work has always been “deeper than just trash.”

Since March 2020, the top priority around the clock seemed to be cleanliness. While most major cities already have issues with keeping the streets clean, COVID-19 proved to make things more difficult, especially in Philadelphia.

Haigler, who is now an author and community organizer, and his fellow sanitation co-workers walked an average of 12 miles a day attempting to create a clean space in the city. After seeing more than 200 of his crew members infected or forced to quarantine due to COVID-19 and a whopping 35 percent more trash on the ground in Philadelphia, he decided it was time to make a change.

This is what I mean by semi-automatic Trash Trucks. This is how we can reduce the litter on the ground, fight the rats problem in neighborhoods but most importantly reduce the amount of injuries sanitation workers encounter on the job. Me in Austin,Texas July 2021‼️ pic.twitter.com/nsBO40YR4c

Advocating for Sanitation and Essential Workers

At one point he worked 12 hours a day for almost three weeks to keep his community clean. So instead of making a change by foot, he did it by picking up his phone.

Haigler used Instagram to inform and show his community about what was going on.

Through his sanitation campaign, he was able to raise $32,000 in four weeks to buy protective gear for his co-workers. The beautiful thing about living in this digital age is the power of social media. It allows people to have a voice to advocate for things that can change the world.

People like Haigler, who earned the 2021 Billies Most Valuable Pennslyvanian, prove that influence doesn’t have to come from athletes, actors or musicians. He has nearly 30,000 followers on Instagram and a successful campaign for his former co-workers to prove it.

His advocacy for sanitation and essential workers has also landed him on ABC, NBC and in the Philadelphia Inquirer.

Although Haigler has shown a high level of gratitude for the praise, there’s one group of people who started as a tough crowd for the sanitation hero: his children.

His children’s disdain for his profession led him to write a book called, I’m Cool, Too.

This book explores the idea of his kids being able to spend the day with dad at work, learning the importance of sanitation work and the profession itself.

“My kids inspired [the dialogue] in the book. There’s this one conversation where the son is like, ‘You’re a sanitation worker? How corny is that? Why can’t you be a police officer or a pilot?’” said Haigler. “My job is just as important as those. You just don’t understand it yet.”

He feels that his kids and many others in the world could learn a thing or two about how proper sanitation laws can change the world for the better.

Haigler plans on continuing his campaign for a cleaner, healthier world by spreading the word through social media and getting his book in places that will spread his message.