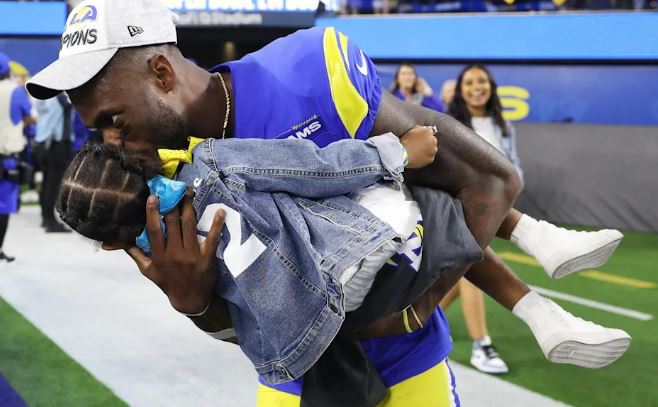 Samaria Jefferson is a trooper.

Pregnant and due any day with her second child, there was no way she wouldn’t be there to support her husband as he played in Sunday’s Super Bowl in Inglewood, Calif. Her baby boy, who was scheduled to arrive on Feb. 17, couldn’t wait.

Jefferson had to leave in the middle of the biggest game of the year in labor. Her husband Van Jefferson, a wide receiver for the Los Angeles Rams, had much to celebrate that night.

After his team defeated the Cincinnati Bengals 23-20 to win the championship, the 25-year-old had to sprint out of Sofi Stadium to witness the birth of his son and the high school sweethearts’ second child at a local hospital.

Talk about a home field advantage.

“I will be 40 weeks pregnant at the Super Bowl, supporting my husband 100%,” Samaria Jefferson told The Undefeated in an earlier report. She has never missed one of her husband’s home games.

She prepared for an early arrival but hoped to stay calm. When she went into labor and had to exit the stadium on a stretcher Sunday night, she told her husband to get out there and play.

“I’ll see you at the hospital afterwards,” Samaria told him.

Van Jefferson raced away from the post-game festivities with his 5-year-old daughter Bella in tow, ready to meet the new addition.

He posted a picture of him holding his newborn on his chest later that night.