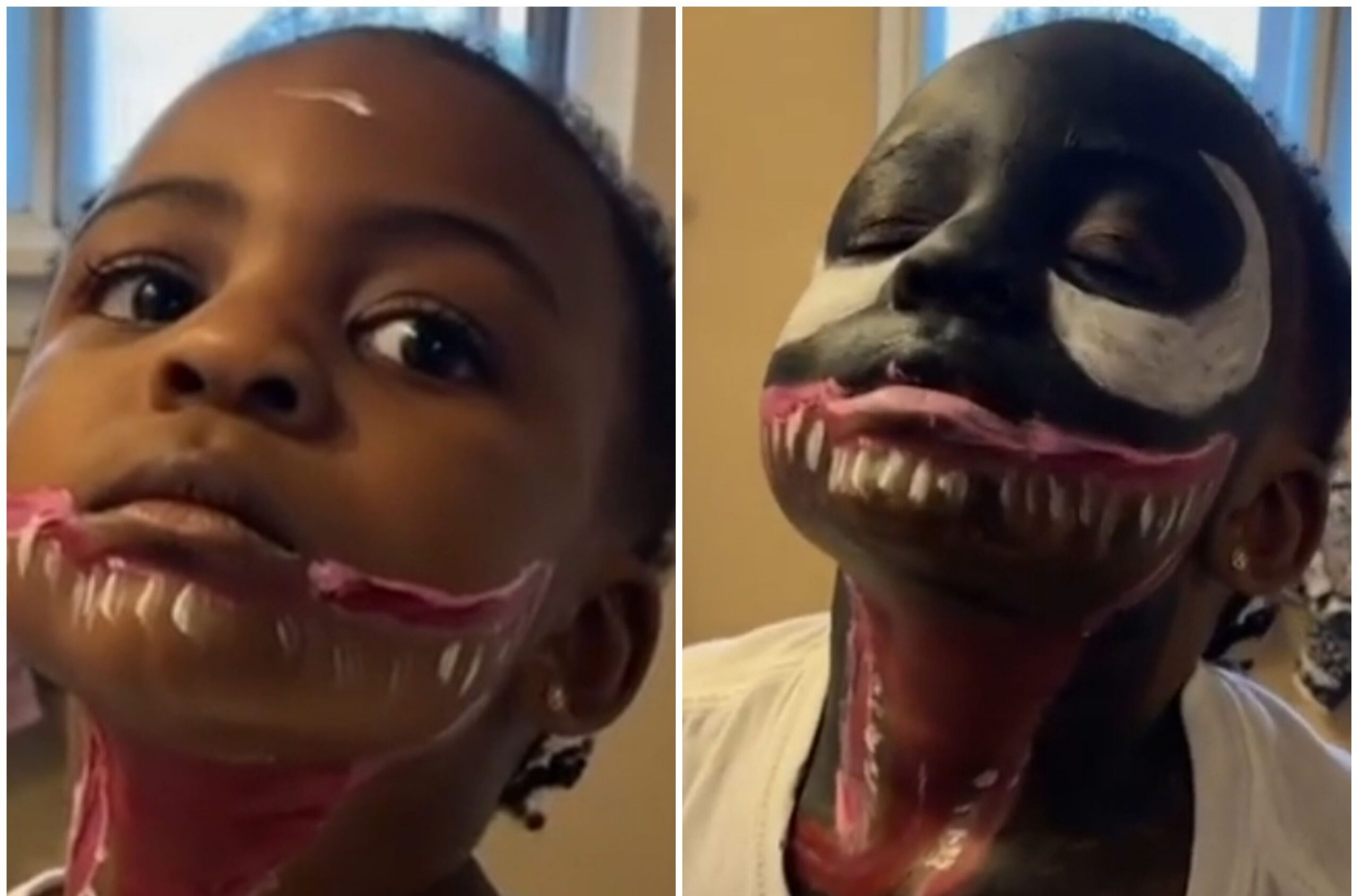 Jarell Patton recalls recently sitting in the bathroom, in awe of watching his 3-year-old daughter Dakota do her own makeup.

And not just any makeup.

She paints herself as bold movie characters, and her father can’t believe her attention to detail. From Jigsaw to Jack Skellington and Maleficent, Dakota’s pandemic hobby revealed a new talent. And if you can’t tell by this lot of characters, she’s a fan of scary movies.

“It’s so awesome, because I’m her dad and I’m like, ‘Wow, I really have a talented kid,’ ” said Patton, who is also father to 1-year-old Dylan.

Based in New York, he shares videos of both of his daughters getting into mischief on his popular Instagram and TikTok page SnackBandits.

But recently, he started posting videos of Dakota’s makeup.

Perhaps the most popular was her wildly impressive rendition of Marvel anti-hero Venom late last month. Dakota was set up in her bathroom with a step ladder, a tablet displaying a YouTube tutorial and an array of brushes and face paint.

Patton captured her progress, and hundreds of thousands of social media users were impressed with the results.

“I think it’s fun and cute,” Patton said. “I don’t know if she will ever be some big makeup artist. She’s a child at the moment. She’s having fun with it.”

Supporters have already asked where they can send funds or makeup for Dakota. The family provided her CashApp $dakotamakeup and GoFundMe page for those looking to support.

Dakota started her craft when she was stuck in the house due to the pandemic. Her mother bought her some paint, and among some of the things she painted on was Patton’s face.

He realized she was surprisingly good for her age, so he let her start practicing on her own visage. This was around the time he let her watch The Dark Knight with him, and she fell in love with Heath Ledger’s Joker.

That was Dakota’s first face, and her father started recording her work from there.

Patton noted that Dakota’s attention to detail has improved markedly in the last couple of months.

“She’s been very very well in tune with the details to it now,” said Patton, who noted one of Dakota’s favorites from makeup TikTok is Alexis of Made You Look.

Allowing their children creative expression is important for Patton and his wife. Their daughters are encouraged to paint and have fun around their home.

“As parents, we see paint and we know growing up in our households in our generation that we got in trouble if we played with paint and makeup. Instantly got in trouble,” Patton said. “But I never wanted to be that kind of parent that disabled my kid from doing anything. If she wants to try, you never know.

“You never know what kids are capable of until you allow them to have that freedom.”