Dearica Hamby on motherhood from inside the WNBA bubble 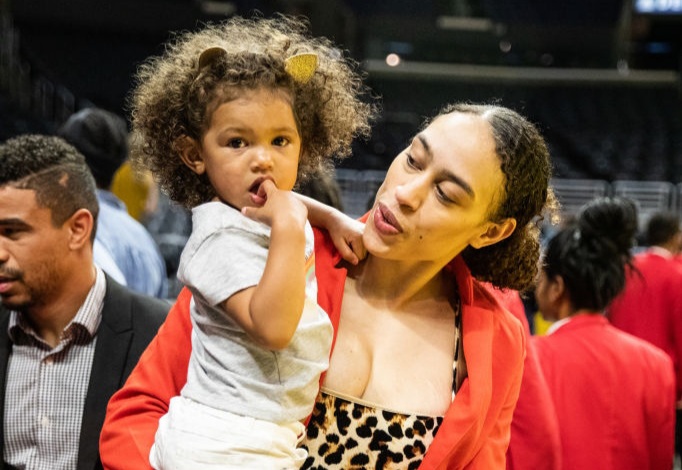 For the next few months, Dearica Hamby and her 3-year-old daughter Amaya can’t go out for ice cream to pass the time.

There will be no more visits to their local jumping park for a while.

They’ll be stuck in a bubble — literally.

Hamby is a Las Vegas Aces star and one of several WNBA mothers preparing for some unconventional basketball.

WNBA players still have to take care of their children inside the Wubble. Man, women are amazing. https://t.co/qXL3F0EADR

Saturday will mark the start of the 22-game season. Due to the COVID-19 pandemic, the games will be played entirely inside the bubble campus at IMG Academy in Bradenton, Florida. Players and families from the league’s 12 teams arrived there earlier this month.

And Amaya has been with Hamby every minute since.

“I can see her getting frustrated a little bit, but kids, they fight through stuff,” the 26-year-old forward told Hey, Black Mom! in a phone interview on Wednesday. “She’s making some friends. She hangs out with (Los Angeles Sparks forward) Candace Parker who is giving her putt-putt lessons.”

Hamby said Parker’s 11-year-old daughter and Phoenix head coach Sandy Brondello’s 10-year-old daughter enjoy playing babysitter to the younger bunch. Amaya, who’s starred in a number of adorable TikTok takeover videos, has also been popular among some of the older children on campus.

The @WNBA posted this on their TikTok and I cannot stop watching it. Amaya is perfect. pic.twitter.com/P0OS6bgZTN

The 3-year-old is no stranger to training camp, but it’s typically at home in a familiar environment.

Among the toys and activities Hamby towed along was Amaya’s special Paw Patrol mug. She enjoys cappuccinos with her grandmother in the mornings, and you’d better think twice before touching the toddler’s cup.

“I was drinking out of it one morning, and she got really mad at me,” Hamby laughed. “It’s really important to her.”

While Amaya enjoys tram rides across the campus, Hamby said part of the struggle as a working mom under these circumstances is keeping her daughter engaged. She found that she’s also owning the weight of her 3-year-old’s frustrations within the bubble.

“I can tell she can get irritable at times,” the Aces forward said. “It’s a blessing and a curse, because obviously I get to spend a little more time with her, but I’m also worried about just mentally and physically — when I come back, all I want to do is sleep.

In training camp, I’ve had to take a step back in a sense so that I can separate being a mom and being an athlete because I’m tired.”

But Hamby has no worries about the court. The 2019 Sixth Woman of the Year is looking forward to the Ace’s Sunday opener against the Chicago Sky. The last time her team faced this opponent, she sunk a wild 3-pointer for a miraculous, second round-clenching victory in the 2019 WNBA playoffs.

The Washington Mystics, last year’s WNBA champion, ended the Aces’ season at 21-13 in the semifinals, and Hamby capped the year with averages of 11 points and 7.6 rebounds.

Shouldering more responsibility this season with an anticipated increase in minutes, Hamby is admittedly conflicted to be playing during the ongoing Coronavirus pandemic. She hopes gameday will help.

“I’m thankful I get to play basketball for a living, but I think once we start playing, it’ll ease a lot of frustrations,” Hamby said. “You gotta take it one day at a time.”