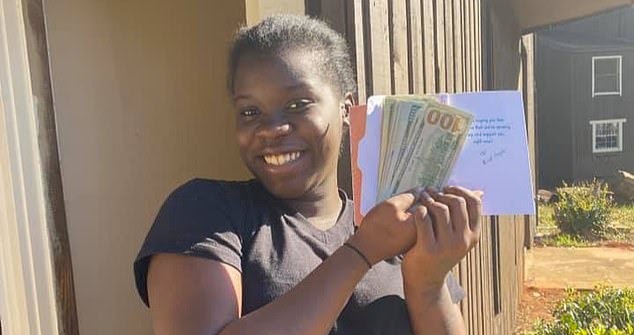 There are a few good people left in this world.

Earlier this month, an angry McDonald’s customer threw his large drink at a pregnant employee in the drive-thru line at an Atlanta-area store.

The woman working named Bryanna is currently 6-months pregnant, and she was visibly shaken up according to a witness account from another customer in the car behind.

After seeing a wet, sticky and crying Bryanna, Feroza Syed felt compelled to do something for the mom-to-be. She posted about the incident on her personal Facebook page. Then she asked her online friends for donations, raising $1,700 for Bryanna in less than a day.

Syed contacted Bryanna through her manager because she wanted to give her the gift in person.

“(Feroza) was like …’I have a surprise for you and I really want to give it to you in person’ so I sent her my address,” Bryanna said in a CNN report. “She gave me the envelope and I couldn’t do nothing but cry because I wasn’t expecting that.”

Syed, who managed to get the plate number of the driver who threw the drink, offered Bryanna a $20 tip the day of the Dec. 4 incident. In her initial Facebook post about it, she wrote that she wanted to get out of her car but was blocked in.

She told CNN that her actions weren’t anything special.

“I just saw somebody being mistreated and I didn’t like what I saw,” Syed said.

Bryanna took some time off after what happened, and she was overwhelmed by the kind gesture, which came right in time for the holiday.

Syed reportedly offered to call the police, but there were no further details available about any action taken against the customer who threw the drink.