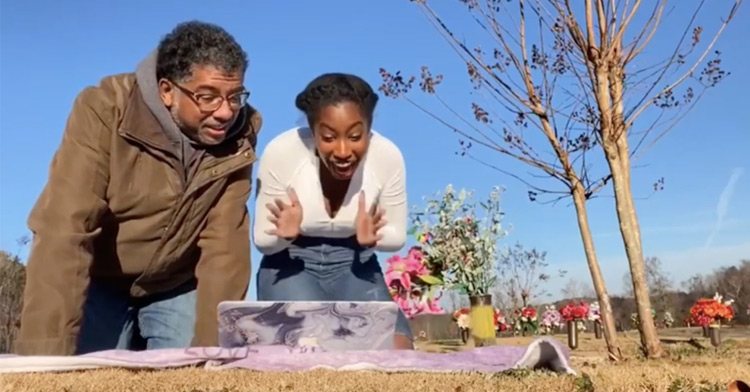 Skylar Hughes unexpectedly lost her mother in 2016, but the Georgia teen has continued to find ways to keep her influence going.

She has affirmations from her mother on her wall, and she and her father James visit Rasheda Hughes’ gravesite for life’s major events.

So it was expected of the Loganville, Ga., pair to pack up and share another big moment with her when it came time for Skylar to open her college acceptance letter.

Skylar Hughes only applied to one school: Duke University. She plans to become a marine biology researcher. Duke, one of the most competitive colleges in the country, is well known for its marine biology program. She wanted to open the email in the presence of her mother, who died after a brain aneurysm left her in a coma for a year.

A heartfelt video Skylar and James captured on their YouTube page shows the 17-year-old’s emotional response to learning that she’d be part of Duke’s 2025 class.

“I was going to start crying regardless,” Skylar Hughes said in a video interview. “So I think (my dad) didn’t know if I was crying, like, tears of joy, or if I was like crying because I didn’t get in.”

Duke had a record-low regular decision acceptance rate at 4.3% for the Hughes’ class. It admitted just more than 2,000 high school seniors.

And as blissful as the moment was for the family, they still worried about covering tuition. Duke costs roughly $80,000 a year, and even with financial aid, Hughes would still be responsible for about $60,000.

When her video went viral in February, her cousins started a GoFundMe that has since collected more than $60,000. She also received a $25,000 donation from Shutterfly after an appearance on the Ellen DeGeneres Show.

“Skylar has nothing but the highest of highs ahead of her,” James Hughes said about his bright daughter. “I mean Skylar’s drive, her mom had that drive, it’s just incredible. So I’m just, I just wanna sit back and watch, and watch her take over the world.”