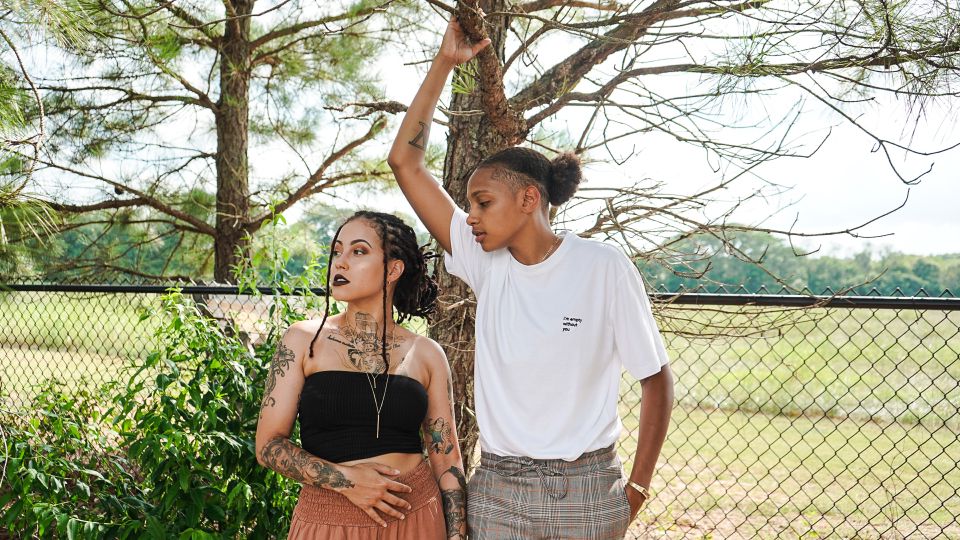 Alexis and Courtney Sullivan live life outside of the box.

The number of tattoos they have or times they dye their hair don’t make either of them any less of a mother.

And being moms doesn’t mean these spouses have to abandon things they enjoyed before becoming parents.

But ask the two content creators behind the Court & Lex brand, they’ll tell you that’s simply the way it should be.

“I feel like that’s another one of those labels that people get stuck under,” Alexis told Hey, Black Mom! “Being a mother is the most wonderful thing in the world, but it’s not all of who you are.”

They feel labels stifle us, especially in the LGBTQ+ community where so many individuals seem to try to fit into one category while navigating.

Both Alexis, 26, and Courtney, 25, lost their jobs in the pandemic. Living in South Carolina at the time, they didn’t have an avenue for creative freedom, so they packed up and moved to Los Angeles along with their three young children.

They both went into dark places mentally as they tried to figure out what was next, so they turned to TikTok and started creating videos.

The content resonated with folks, and the wives realized they had an opportunity to showcase raw LGBTQ+ family life, love and humor that spoke a broader message: get rid of labels.

“Really, we just want to destroy these labels that society has put up for us,” Courtney said. “I feel like labels make it complicated, it makes things complicated. It makes it harder for people to come out to their family and go throughout life.

In fact, Alexis didn’t come out to her family until she introduced them to Courtney as her partner. Their story is reminiscent of love-at-first-sight vibes, as the two were immediately drawn to one another.

For Alexis, nothing else mattered once she met her wife.

The two met at a wedding in South Carolina. Alexis’ aunt was getting married and Courtney was the photographer. It didn’t take long for the two to build a relationship; they got married nine months later.

Their relationship and marriage videos garner some of the highest views. Alexis and Courtney turn their sexuality, flaws and mental health advice into playful clips.

“I feel like we represent real people,” Alexis said. “A lot of the couples I see, they’re queer or whatever, they’re these cookie-cutter families. (What) we want to represent: nobody’s perfect.

When Courtney married Alexis, she also became a mom to three little ones in 7-year-old Noell, 5-year-old Genesis and 3-year-old Scarlett.

It was an adjustment, but Alexis gave her the space to manage.

This included tasks such as changing diapers and getting comfortable taking the children on outings alone.

“It was a lot of learning, a lot of trial and error,” Courtney said. “The first time I changed a diaper, I put it on backwards.”

She considers herself a big kid, and joked when she said the young trio was easy to embrace since they act like Alexis.

This couple shares some of their parenting journey on their page, with an emphasis on being OK with life outside of motherhood.

Establishing this kind of balance benefits Alexis and Courtney as individuals and as spouses.

“A lot of moms feel like that’s all they have to be, that you have to look a certain way and act a certain way in order to be perceived as a good mother,” said Alexis, who’s also opened up about accepting her body after carrying three children.

While Sullivan family spends a majority of their time together, their time alone helps. Besides, creating content is a full-time job for them, so they use their breaks away from children to create videos, experiment with new camera angles and ideas and to brainstorm new content.

The lifestyle works for these two. It’s nothing like what they could have imagined given their past in Greenville, South Carolina, yet the perfect jobs for the inseparable wives. Even in their videos, you won’t see one without the other.

Although they take time away from the children to create, they still have to “bribe” the young ones with snacks to make videos at home.

They, like many Americans during the first part of 2020, were stuck in the house and jobless with nothing to do. Their mental health and financial stability was suffering.

Alexis, a former banker, and Courtney, a former chef, started making videos to relieve stress and boredom. Then the clips started going viral. Between Instagram and TikTok, their videos receive millions of views on a regular basis.

Recording videos, along with couples therapy and building a brand, brought them closer.

“We hated going to work because we hated not being around each other,” Lex said. “It’s like, I like you so much more now.”

With June being Pride Month, expect content from Lex and Court to be extra special.

“I feel like this is our first Pride Month actually giving and setting examples,” Courtney said. “I feel like I have something I can give this month.”