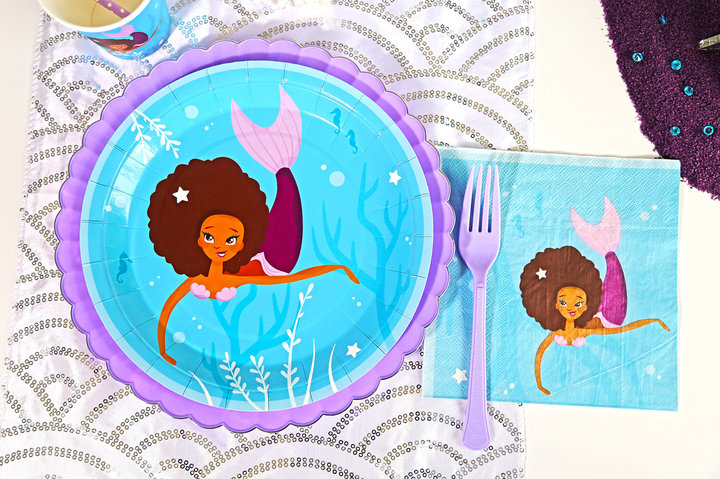 When Lynette Abbott couldn’t find party supplies that represented her children, she decided to create her own.

Due to a lack of color, Abbott couldn’t find anything that resembled her 5-year-old daughter Anyah or her 9-year-old son Adonis.

“Hair is always a topic when you’re talking about people of color,” Abbott said in a Huffington Post article about the significance of her character’s hair. “Most mermaids have long, flowing hair, which is beautiful, but I wanted her to have hair that basically looked like my daughter’s hair.”

Both Anyah and her new aquatic friend have beautiful hair that defies gravity. The mermaid deliberately has a purple fin, as the color represents royalty and prosperity in Africa.

It was vital for Abbott to show brown children positive images that are relateable, especially because she feels they will develop ideas about themselves based on what or who they associate themselves with. Developing a self image of value and love were paramount in the creation of her party supplies.

“I want my daughter, and every brown little girl on this planet to feel beautiful, acknowledged and loved each time they look at our party products and see themselves smiling back,” Abbott said in her campaign.

It was actually Anyah who planted the seed in her mother’s head; it was when Abbott, the owner of Craft My Occasion, was planning Anyah’s birthday party last year that she noticed the discrepancy. She started a Kickstarter campaign for her inaugural design and hopes to raise $20,000 to launch the mermaid supplies. The packages include plates, cups, balloons and a backdrop.

It’s only the opening workings for Abbott, who hopes to incorporate additional skin tones into her collection to expand the representation.

“A lot of moms are very excited about it,” she told Huffington Post, also noting that three interested moms from Germany contacted her. “Everyone is saying it’s about time, this is exactly what we need.”

And, hey, everyone: you’re absolutely right.