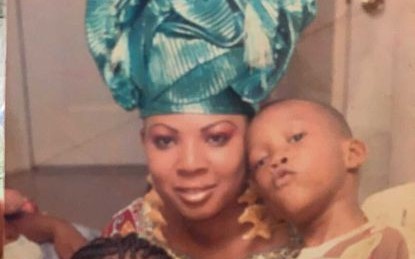 Fatoumata Tunkara and her 6-year-old son Omar Jambang were visiting a friend when they got trapped inside a burning building in the Bronx on Sunday.

The mother and son were among 17 that perished in New York City’s deadliest fire in three decades. The youngest victim was 2-year-old Ousmane Konteh.

Tunkara, 43, was a mother to five children between the ages of 6 and 19. Her eldest son Abdullah Cham told the New York Daily News that he attempted to call his mother dozens of times before learning the devastating news.

“I knew she was in that building, but I thought she got out in time,” Cham said. “Calling her, calling her, more than 40 times. She didn’t pick up the phone. …I feel like she was not supposed to be there.”

The teen cried as he recounted the terrible event, which left him as the family patriarch to three younger siblings in the United States. One of Tunkara’s children lives in Gambia, the family’s home county.

Many of the victims were Muslims from Gambia, and other families like Cham’s are left broken after a blaze caused by a spark in an electric space heater. Officials from the New York City Fire Department said the self-closing doors meant to keep smoke at bay failed to work during the fire that left an additional 60 people injured.

The 16-year-old brother of Fatima Drammeh is one of those recovering from the high-rise fire. Drammeh, 23, tragically lost her mother, 50-year-old Fatoumata Drammeh, and three siblings 21-year-old Foutmala, 19-year-old Nyumaaisha and 12-year-old Muhammed; she had just arrived to work when she heard about the fire.

A family of five Dukurays (5-year-old Fatoumata, 11-year-old Mariam Dukureh, 12-year-old Mustapha, 37-year-old Haja and 49-year-old Haji) lost their lives in the fire, and all 17 victims died by smoke inhalation.

GoFundMe pages have begun to circulate in support of the victims’ families, including one for the bodies of Tunkara and her son Omar to be returned to Gambia.

Others have been started for children who are now orphans.

New York City has also launched the Bronx Fire Relief Fund to support those impacted by the tragedy.

Government has failed …,” said Bronx Borough President Vanessa Gibson at a candlelight vigil on Tuesday night. “When we allow people to live in conditions like this, when they have to use space heaters just to be warm.”