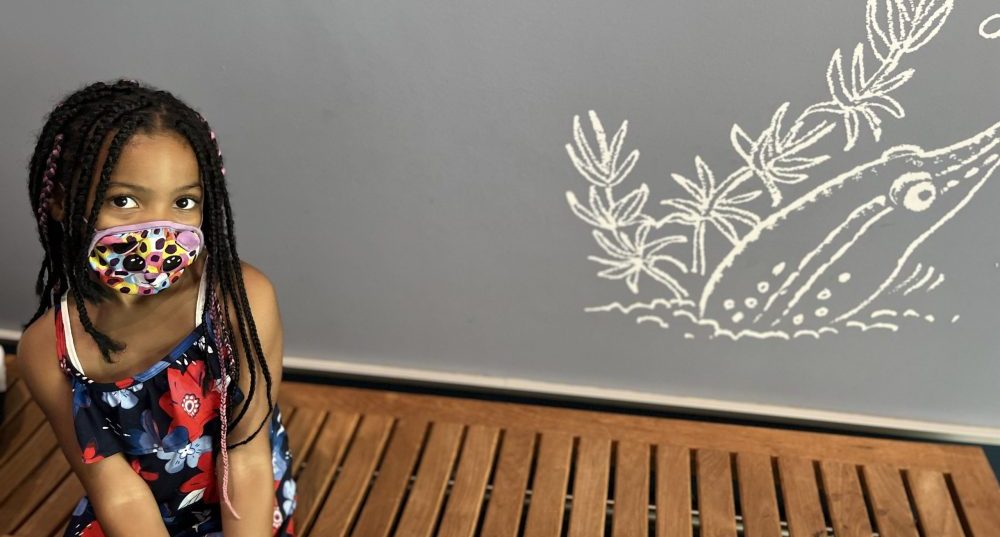 Rare is the agony of seeing your child in pain, knowing there is little you can do to ease their discomfort.

Yet through all the suffering, you must remain tall. You’re not allowed to lose it, because then what happens to your baby?

For three weeks in August, I leaned this power, praying it would get my 6-year-old daughter through a lengthy stay at a children’s hospital.

Over the summer, she developed a nervous twitch of chewing on her hair extensions; she actually left me no choice but to remove them. She had her hair braided several times before this. She got it done for camp, since she’d be swimming, hiking and on the lake daily. Turns out, she was actually ingesting the hair. She ingested so much that it gave her a severe stomach infection, which was presenting like a stomach bug.

Aug. 1 was a special day for my family. My daughter was starting the first grade, marking the beginning of a long-anticipated chapter for her. She was so excited for the year ahead.

Only, she got sick that day. The school nurse called me less than two hours after we dropped her off and said she had been vomiting.

My daughter, who started first grade at 5 and wound up spending her sixth birthday in surgery, seemed a bit off that morning. She was unusually apathetic; I thought maybe she was tired of me asking her a million and one questions about the first grade.

Phoenix was home with me for a few days, as she was diagnosed with a stomach bug — the same thing we thought she had over the summer.

But her pain severely intensified, so I took her to the emergency room on Aug. 4. We thought maybe she had appendicitis.

After sharing my fears of appendicitis and talking to doctors about my kid’s past few days, they scanned and tested her only to tell me they weren’t sure what was happening.

She was admitted to the hospital that night.

These first few days are kinda foggy in my mind because she was in constant, intense and severe pain, but eventually we saw pediatric gastroenterologist Dr. Benjamin Gold (heaven sent!) who told us there were some growths in her colon that may be constricting her bowel movements.

Of course, you hear the word “growth” and your heart falls through the floor. They informed me that they wouldn’t know more until they removed and biopsied them.

Sounded like a plan, until they told my family we had to wait the weekend to clear her out before going into her colon. It was stressful, because every day she was poked and prodded for tests.

Monday couldn’t arrive any faster, and we prepared for the first of what would be three total procedures.

When they removed the growths, we later learned that they were juvenile polyps; these rare colon polyps occur in about 2% of children. Nothing to worry about.

Everything seemed successful. They told us she’d be groggy after the procedure, but as the hours passed, I knew something was seriously wrong with my child.

She was still writhing in pain; I can’t tell you how many times I called our healthcare team that day. And something was very wrong, which we discovered during an emergency overnight surgery.

Dr. Gold returned to the hospital when he found out Phoenix was going into the operating room; doctors suspected that the polyp removal created holes in her colon that were then leaking air into her chest.

It was during this surgery, an exploratory laparotomy (an ex-lap), that doctors discovered wads and wads — and wads — of rotten extension hair clogging up her stomach.

Her stomach was so full of it that the hair started disintegrating, which caused infection, decaying and perforations in her upper intestine.

The solution was to remove the hair, resect a small piece of the intestine and hope to God that the fuse didn’t tear.

The surgery left my daughter in the PICU and with a nasogastric tube (or an NG tube, which is placed down the throat and into the stomach when people can’t have solid food). She received liquid nutrition for all but the last two days of her stay as her stomach and intestine healed. The surgeons did not want to risk the area coming apart.

If that wasn’t already bad enough, she had another surgery on her birthday to remove an infection that developed in her incision wound. She was having such a hard time walking and getting out of bed because it was infected. That meant, when she left the hospital, it was with a large, open wound that we had to dress and pack every single day until surgeons cleared my daughter.

Phoenix was cleared on November 10. That meant no more dressing changes and she was able to resume all regular activity we’d avoided since she left the hospital on Aug. 22 (such as traditional baths and physical education).

While I outlined some pretty personal specifics of our hospital stay, it’s hard to find the words to capture all that we went through. It’s honestly the tip of the iceberg. I mean, this was deep. All of the doctors said she’s going to be written about.

I don’t talk about having to arrange work and childcare for my younger daughter, who also had surgery when she was but 11 days old.

I didn’t discuss how I cried all the tears out of my body or how I never knew I could pray so hard.

It’s hard to talk about how my daughter screamed each time they drew blood until one day she grew so weary that all she could say, and bravely so, was “I won’t scream but please just let me know before you do it.”

How I broke down every time her dad had to leave my side to care for our other child.

How one doctor suggested we shave her head before leaving the hospital.

How the trauma scissored the already-strained relationship I had with my mom.

How I teared up each time I noticed her weight loss or every time she pitifully begged for a tuna sandwich because she was hungry.

How seeing her joyless in the PICU nearly broke me.

Writing has always been deeply cathartic for me. It’s how I move through struggles, because I’m not entirely over this one.

Just the other day, I found a bottle of children’s Pepto Bismol and it brought me to tears. I had given it to my daughter twice when I thought she had a stomach bug, and she threw up pink both times.

Sharing this piece not only helps me cope, but it also warns other parents about what could potentially happen if you install braid extensions too soon (although she could have been 15 and the same thing could have happened because of the bad habit).

It doesn’t seem like it because I get on my Instagram and make jokes and tweet about basketball and all of that, but what my daughter went through radically changed me.

I learned how to care less about managing other people’s emotions, who I can call on the worst days of my life and that even if my kid is 16 and asks for box braids, it’s the Jim Jones jawns for life!

What My Newborn’s Unexpected Surgery Taught Me