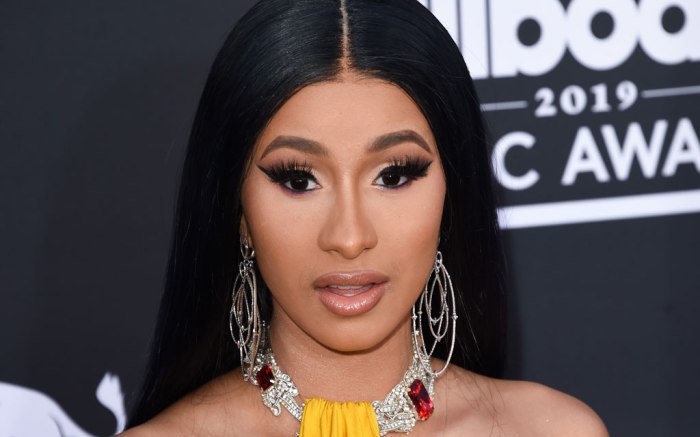 Not on social media. Not on television. And not in her interview with Vogue magazine, where she got raw and real about motherhood, feminism, stripping, politics and more. The piece is for the January 2020 edition.

With slick, black hair, Cardi graced the cover of Vogue with her 1-year-old daughter Kulture. In the “Fashion the Future” edition, the Press rapper wore a Michael Kors dress, Jimmy Choo shoes and Cartier and Tiffany & Co. accents. Kulture wore red undies with a little bling of her own.

The article addresses Cardi’s early life in her hometown of Bronx, New York. The 27-year-old talked about success after her 2017 chart-breaking single Bodak Yellow, followed up by Invasion of Privacy, her first studio album.

According to the article, she will release her second album early next year.

When asked about balancing motherhood with sudden fame, she was honest.

“Being a mom—how can I say it? Things are a little bit harder to balance, but it’s good for the mental,” Cardi told Vogue.

“Like, if I’m playing with my daughter, I forget about the issues.”

Cardi married Kulture’s father Offset, who is also a rapper, but they separated when he cheated on her. When she took him back, she said people criticized her decision.

“People that be in marriages for years, when they say till death do us part, they not talking about little arguments like if you leave the fridge open. That’s including everything,” she said.

Now that she’s a mother, she’s working to secure her daughter’s future. She’s empowering her Kulture to be her own boss.

Cardi understands her daughter doesn’t like long airplane rides. She lets her sleep on her chest. She and Offset want to start a children’s clothing line, with Kulture seated as the CEO.

“I could shake my ass, I could be the most ratchet-est person ever, I could get into a fight tomorrow, but I’m still a great mom,” Cardi B said.