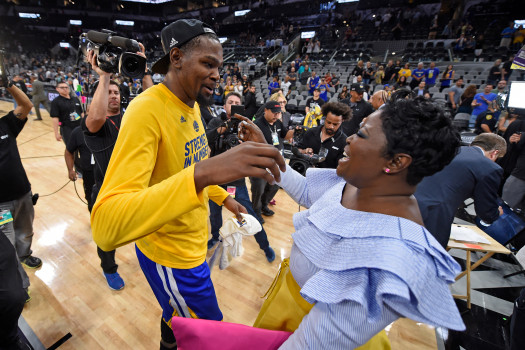 She’s the real MVP, and it’s been a long time coming.

Wanda Durant, the mother of Golden State Warriors superstar Kevin Durant, led the hype line Wednesday after the Warriors beat the Cleveland Cavaliers 118-113 for a three-game lead in the NBA Finals.

Kevin Durant hit the eventual game-winning 3-pointer in the comeback victory, and mama Durant was excited.

Mama Curry, whose two-time MVP son is in his third consecutive NBA Finals series, was proud, but it’s been a long road for the Durants.

This season is Kevin’s first with Golden State after ending a nine-year career with the Oklahoma City Thunder; they were the Seattle Supersonics when they drafted him No. 2 overall in 2007. Durant has faced a lot of criticism for his decision to join the Warriors and leave behind Thunder guard Russell Westbrook.

In Durant’s tearful 2014 MVP speech, he famously called his mother “the real MVP,” for all the sacrifices she’s made for the family.

When Durant and the Thunder lost to the Miami Heat in the 2012 Finals — LeBron James’ first title — he broke down in tears the moment he saw his mother.

The Warriors are one victory away from their second championship in three years, which would be KD’s first if they won it all. Just imagine, Durant winning his first title against the James the way James did him five years ago.

Anyway, we have all the feels for Mama Durant and her joy.