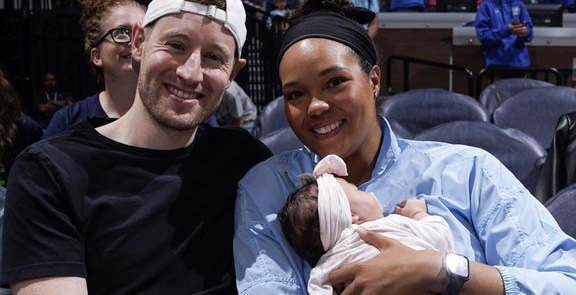 After giving birth to her first child in May, WNBA star Napheesa Collier made her return to professional basketball.

The Minnesota Lynx forward made her season debut on Sunday, less than three months after having her daughter Mila on May 25.

“I was really excited,” said Collier to ESPN after helping her team secure a pivotal victory late in the season. “Obviously, there’s some nerves coming in, especially this late in the season and trying to get back here and rush to do everything. But it felt so good to hear my name called and have the fans cheer for me. It was a really good feeling. So I’m really glad I played tonight.”

The 25-year-old previously expressed that she hoped to be back on the hardwood this summer. The WNBA regular season ends on Aug. 14, and Collier wanted a chance to play alongside legendary teammates Sylvia Fowles during Fowles’ final season.

Collier, the 2019 WNBA Rookie of the Year, was uncertain about her return from maternity leave a couple of weeks ago. She needed advice from other players who told her, “this is hard to do.”

“I have to listen to myself, my body. Not rush it,” Collier said.

Collier and her fiancé Alex Bazzel, who is a WNBA skills coach revealed the pregnancy news in November.