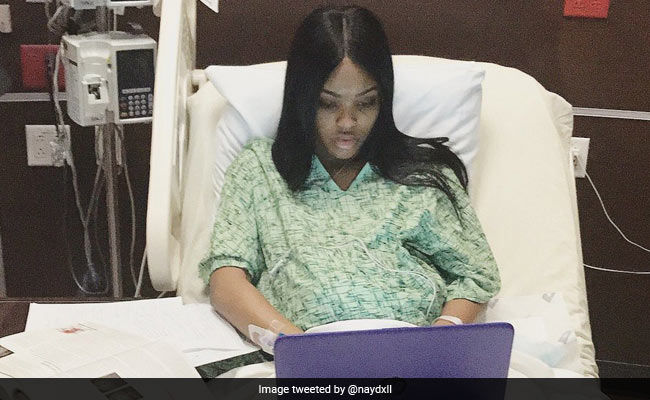 Nayzia’ Thomas may have broken some stigmas about young mothers with a single photo.

The 19-year-old was pictured sitting in a hospital bed ready to give birth to her son — straddled by a laptop! She went into labor earlier than expected, and it coincided with her last final exam.

Instead of having an “incomplete” grade for her psychology final, Thomas, who studies the subject at Johnson County Community College in Kansas City, Kansas, took her materials along. She finished her final moments before her son, Anthony, was born on Dec. 12. Her goal was to have everything done before finals week of Dec. 11. But, as all mothers know too well, babies do what they want to do when they want to do it.

Anthony’s early arrival was no sweat for Thomas, though.

my mom took this pic & it’s the perfect explanation of my life. yes i’m about to have a baby, but final SZN ain’t over yet ?? pic.twitter.com/7LyrDBE9iN

“It shows that I follow through,” Thomas told Yahoo! about the Twitter photo that went viral. The image captured by the sophomore’s mother made its way across various outlets, giving Thomas a platform for her story. A majority of women make up the 26 percent of — or 4.8 million — college undergraduates with children dependents, according to a 2014 study from the Institute for Women’s Policy Research. Just over 70 percent of this population is women. Black women accounted for the highest percentage of undergraduates raising children at 47 percent.

“School is so important to me,” Thomas said in the Yahoo! interview. “I didn’t want the pregnancy to be in the way. That’s what people expect. You’re a teen mom, you’re a young mother. That’s why my mother took that picture.”

Thomas, who stylishly showcased her bump via Twitter pictures throughout her journey, said she was working three jobs while taking summer classes when she learned of her pregnancy, which gave her some minor complications. She provided an update on her Twitter page that noted she went into post-delivery shock but that she finished the semester with a 3.5 GPA.

Thomas, who was wrapping her dissociative identity disorder final when the picture was taken, plans to take a month off. When she returns to school, she hopes to work with her mother and boyfriend to help care for the baby as she finishes her degree.

But from the looks of it: Thomas is a mother on a mission.