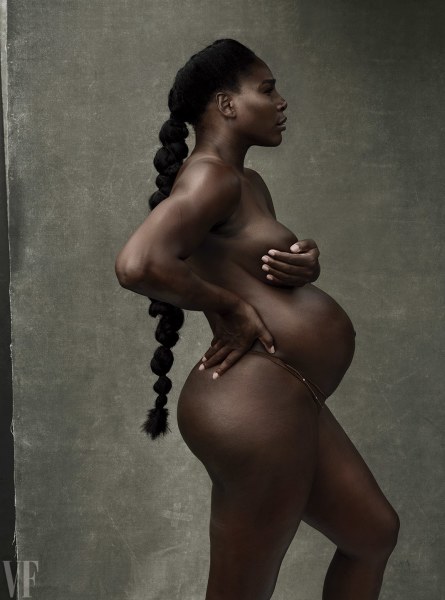 Serena, we can’t take it!

Stop dazzling us with your glow.

Stop melting us with your mommy-to-be greatness.

Stop mesmerizing us with all of your maternal excellence.

We are all about to explode.

Serena Williams broke the internet Tuesday morning when she posted the first images of her only maternity shoot, a stunning set crafted by artists at Vanity Fair magazine. Williams will grace the cover in August.

She wore nothing but waist beads and a butt-length braid, bearing her bump. She released the long, dark mane in the photo that will appear on the cover.

Her fiance Alexis Ohanian, the co-founder of Reddit, joined her for a few shots.

As she had since breaking through on the tennis scene nearly three decades ago, Williams amazed. In her shoot, she was stunning, fierce and — as she does best — winning.

@SerenaWilliams is an inspiration to many—especially her fiancé @AlexisOhanian. He says, “I find myself just wanting to be better just by simply being around her because of the standard she holds.” At the link in bio, read the epic true story of how the unlikely pair fell in love. Photograph by Annie Leibovitz.

Williams has embraced her pregnancy, an attitude that started in January when she won her historic 23rd Grand Slam title at the Australian Open. She was a few weeks pregnant at the time, but no one knew. Williams announced her pregnancy via Snapchat in April.

She debuted the bump at this year’s Met Gala in May, and even showed off some controlled strokes on the court earlier this month.

This baby, whose gender will remain a surprise for now, will probably be ready to play once he or she is born. Williams, though, expects to continue her professional tennis career and plans to marry her fiance Alexis Ohanian in the fall.

The Vanity Fair article delineates the pair’s unlikely love story; Ohanian, the Reddit co-founder, hadn’t ever watched a tennis match until he met Williams. The idea of being pregnant was so ludicrous to Williams that she forgot her first pregnancy test was in the bathroom for hours. It took six little white sticks for it to settle in, and she handed all of them to Ohanian in a brown paper bag to reveal the news to him.

Williams has hands in business, fashion and philanthropy, modeling her versatility. Her journey to motherhood has been exciting to watch, and we are looking forward to more!