Supporters Raise Money for the Mother of Ahmaud Arbery 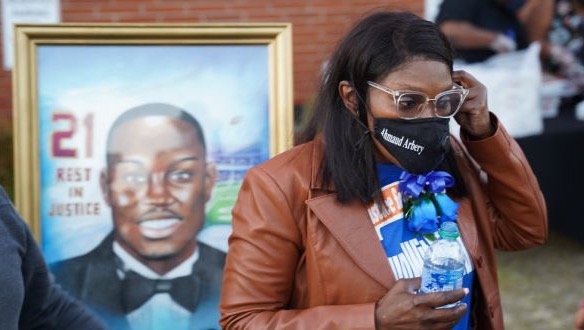 In just two days, supporters raised more than $240,000 for the mother of Ahmaud Arbery ahead of the murder trial for the three white men accused of killing him last year while he was jogging.

Donations for Arbery’s mother Wanda Cooper Jones were collected through crowdfunding platform GoFundMe, and it was organized by Debbie Dixon.

Fighting for justice for her 25-year-old son has come at great personal costs for Jones, who had to leave her job and rent a home near a Georgia courthouse to be present for the trial, according to the GoFundMe statement.

In February of 2020, three white men in a pickup truck pursued an unarmed Arbery while he was on a jog in Brunswick, Ga. Two are accused of shooting and killing him while a third recorded the murder. All three have pleaded not guilty on the charges of felony murder.

When the horrific video of Arbery’s killing was made public, it sparked national outrage.

“When I laid Ahmaud to rest last February, a part of me left also, and it’s painful,” Cooper Jones said in an NBC interview.

Georgia passed a hate crime law in the wake of his death, as it was previously one of four states without one.

The trial’s nearly all-white jury selection has been scrutinized. The jurors — 11 white and one Black — were sworn in on Friday.

Cooper Jones was discouraged by makeup of jury members in this racially-charged case. There were 12 Black people in the final pool of prospective jurors, and defense lawyers presented reasons unrelated to race to unseat eight potential Black jury members.

For Cooper Jones, the focus remains on justice, which for her looks like “having all three individuals…sentenced to life in prison.”